On the 20th of December, FFG gave to me: three packs-of-champions, two villain-scenarios and a week-and-a-half to play it all. I really lucked out this year. I have a subscription through Team Covenant for all the Marvel Champions product types and I received Captain America, Ms. Marvel, and the Green Goblin expansions on Saturday, December 21st. I was off work from December 23rd until January 2nd. I spent a week of that time in St. Augustine, Florida, at my in-laws home where it’s generally a pretty laid-back, lazy time. As of the time of this writing, I have played quite a bit of Champions. (note from the future – I paid for this statement by having almost no time to play for all of January).

I did not play the pre-built decks for Cap and Ms. Marvel, but I did keep them in the Leadership and Protection aspects, respectively, when tweaking the builds and exploring all the new cards and scenarios. I found myself hardly using any Protection cards when playing Ms. Marvel because her signature set can do so much on its own. I mainly just played the Energy Barriers, Luke Cage, Nova, and the occasional Tackle. I also found myself wasting the Get Behind Me‘s and Preemptive Strikes as I never seemed to be in Hero mode when they’d be useful. I flip nearly every turn and it felt like the turns where I started as Ms. Marvel and ended as Kamala Khan would see a lot of cards wasted in my hand unless they were the aforementioned expensive supports and allies. So I decided I’d lean into the allies a bit more to make sure I had useful things I could do on every turn. Though I eventually want to try Ms. Marvel in all aspects, it was convenient to move to Leadership first because I could switch aspects with Captain America and explore a Protection Cap deck focused on stunning with Heroic Strike and Tackle. I ended up with the toolbox-iest of toolbox-y decks, which is a play style that I really just love. Who would’ve thought that combining my new favorite hero with my favorite aspect would lead to possibly my favorite deck?

Click here for a link to this deck on MarvelCDB. Thematically, I enjoy the idea of Kamala as the Leadership character at the table despite being so young, and it makes me think of those Summer camps you might go to as a high-achieving student where they teach you to be a leader or pretend you’re in government even though you’re only 12 years old. Hence the name of the deck.

The Two Phases of Kamala Khan 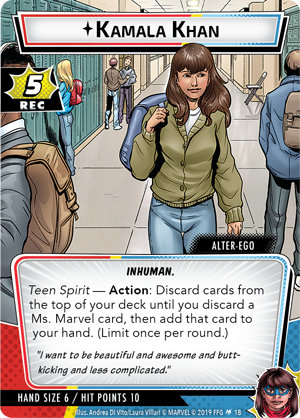 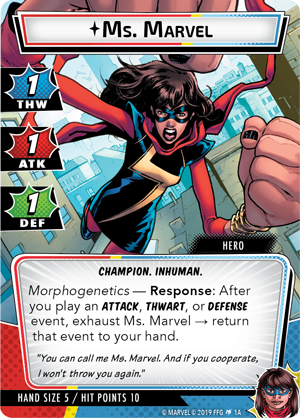 There are two types of turns when playing Ms. Marvel: turns where you start as Kamala and turns where you start as Ms. Marvel. The reason this matters is because of the Personas that Ms. Marvel can put into play which mostly have Alter-Ego Actions, and the events that define her play-style which are Hero Actions. The turns where you start as Kamala are the easiest to figure out, because you generally use the Teen Spirit ability (while humming Nirvana, of course), use Aamir Khan, use Nakia, then flip and use the Nakia discount and start Big Hands-ing and Sneaking By all over the place. I’ll talk about Bruno later. It’s the turns that you start as Ms. Marvel that are harder to work out. You have to use your Morphogenetics ability and play your events without the benefit of extra cards from Aamir and Teen Spirit or the discount from Nakia. You will get all those cards after you’re done being a hero for the turn. Later in the game, once most of your supports and upgrades are out, most of these cards you’ll be drawing at the end of your turn are events and resources that will not be super impactful, or maybe even unplayable, at this point in your turn. It can be especially difficult to make use of Nakia with the upgrades and supports already down.

So in order to make use of these extra cards, I decided to start playing Ms. Marvel Leadership, because you can still use Nakia to pay for allies and event cards that target your allies. The allies serve three main functions:

1) Give you something to spend your end-of-turn resources on.

2) Smoothing out your turns so that you’re always doing some attacking and thwarting rather than just alternating big swings and setup turns.

3) Defending for Ms. Marvel so that you do not have to waste actions on Recover.

I will say that this deck is particularly attractive to me because I primarily play one-handed solo. I am sure that Justice and Aggression are effective with Ms. Marvel but they seem pretty focused on min-maxing around one facet of the game and therefore better suited to multiplayer. Leadership, on the other (Big) hand, lets me do a little bit of everything and gives me lots of lines of play to think through on any given turn. I have heard and read some skepticism regarding Ms. Marvel Leadership because the aspect does not provide any additional events that are targets for her Hero ability. To that I’d say that her Hero cards provide enough targets because I hardly ever have a turn with zero events I could recur. The reality is that you really only need one in your hand per turn, assuming it’s of the type that you need at that point in the game. You can always use damage cards and if you ever only have a thwart event and no threat to remove, well, you’re probably winning anyway. I did have some slots that I was going back and forth on so I put in some Haymakers to provide a few extra targets for Morphogenetics. I particularly like Make the Call here because it makes it less painful for allies to end up in your discard pile from Teen Spirit.

Bruno Carelli is an interesting card because he actually flips what I was saying earlier about turns where you start as Kamala being easier to figure out. He’s actually difficult to use on those turns and easier to use on turns where you start as Ms. Marvel. If you flip to Kamala during your turn and then use all of your alter-ego abilities to draw more cards, you can stash one of them away on Bruno so it’s not a dead card. If you start as Kamala, you have to do all this card math and figure out which cards, if any, you’ll be left without a chance to play and then you can preemptively stash them under Bruno. I consistently get this calculus wrong, somehow. I know that some players like to use this ability and Aamir’s ability to stack the bottom of the deck to sculpt a specific hand for a big turn. I am sure that’s effective but it’s not how I play. I just use Bruno as a means of getting extra cards out of my hand to ensure that I’m always drawing as many cards as possible at the end of my player phase. And then if it makes sense to use Bruno to bring less than 3 cards into my hand, I don’t worry too much about the lost value.

Notes on Other Cards

I’ve already mentioned Haymaker being kind of a flex slot for me. It’s not the best but it does up the attack event count a bit and provides an energy resource for Vision. I think Vision is a fun card even though others find him expensive. Get Ready is another good card to have with a pumped-up Vision but is also good for Nick Fury. I also use it in conjunction with Make the Call to sometimes get Maria Hill or Squirrel Girl into play twice on the same turn. I do not think I’ve actually played Lockjaw yet but I like the idea of playing him in Ms. Marvel because you don’t mind if he gets discarded with Teen Spirit. It does make Make the Call a little redundant, however. Endurance filled an extra card slot because it’s an energy resource for Vision and the extra hit points can mean fewer turns spent recovering. Finally, I only play with physical cards and I like keeping a deck built for each aspect, so I don’t have enough copies of Avengers Mansion or Helicarrier to run multiples in every deck. If I was interested in really pushing the efficiency of this deck, I would probably drop some of the other cards mentioned above for extra copies of Avengers Mansion and/or Helicarrier.

I will not claim that the above list is optimized. It’s just where I’m at as of the time of this writing. My goal with this article is really just to highlight that 1) you don’t need as many attack/thwart/defense as possible to make Ms. Marvel good and that 2) having a plan for how you are going to make the most of your card abilities for each type of turn (Kamala-first or Ms. Marvel-first) is required for a good Ms. Marvel deck. I think both of the above points could be incorporated into a Ms. Marvel build for any aspect, it just happens that Leadership is where I am having the most fun.