Welcome new readers and returning readers to another Marvel Champions Spoiler. Thank you for taking time out of your day to read our spoiler article. Also we would like to send a huge thank you to FFG for sharing this spoiler with us and allowing us to share it with you. Without farther ado, here it is…. 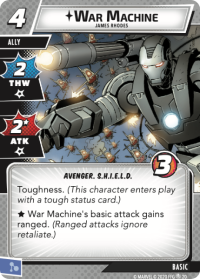 This is a solid 4-cost ally. His stats are pretty much what you’d expect based on the other allies we have so far, but he stands out in three particular ways for me. For starters, he’s Basic, which means he’ll probably go in every deck I build that needs some thwarting help that can hope to play a 4-cost ally. Basic cards usually have a drop-off in value compared to similarly-costed aspect and signature cards, but War Machine is up there with a lot of non-Basic cards.

Next, his Toughness means he’s either getting an extra activation or blocking an extra attack. I would expect his most common use to block an attack, thwart twice, then block again. Soaking two attacks and removing 4-threat with a 4-cost Basic card is pretty good. (Reminder: Webbed Up is a 4-cost signature card that blocks two attacks and doesn’t remove any threat, so this card is up there in terms of value.)

Finally, Ranged is an interesting option to have. We don’t know yet how often Retaliate is going to come up in future scenarios, but I appreciate the fact that we don’t seem to be paying a premium for it here. The ability to have an answer to Retaliate on a card we’d probably want in play anyway is a nice bonus. Looking at currently-released enemies with Retaliate, he doesn’t really stand out in terms of being a complete answer to them but he helps. The most obvious is MODOK and, while War Machine probably won’t deal all 8 damage by himself, he certainly softens MODOK up for the plethora of 4-6 damage cards we have available. Weirdly, the other minion with Retaliate right now is Iron Man’s nemesis Whiplash, but the previous War Machine ally is of course in Iron Man’s signature pool so I probably wouldn’t have both in the same deck. There’s always multiplayer though.

Ultimately, I see this ally as a slightly-beefier Mockingbird, and I play that ally a lot (in solo). I think that if having Mockingbird in your deck makes you feel warm and safe like it does for me, then you’re probably going to like this War Machine too. I am happy to see this character make an appearance as a card that I find generally useful rather than just in specific cases like his Iron Man version.

When I first saw this card, I was a bit disappointed. After all, we already had a War Machine in the game and Basic allies usually play second fiddle to allies that belong to aspects. But the more I look at this card and the more I’ve sat with it, the more I am coming around on it. I’m actually looking forward to getting it on the board and into my deck. Why? I’ll explain.

The first thing about this card that I think is good, is the fact that it opens up War Machine to everyone, and not just for the Iron Man player. 2ndly, it’s another Avenger for your Avenger decks. 3rdly, that stats are really solid for a 4 cost ally. 4thly, it has Ranged, which should be really important moving forward. Lastly, it has the S.H.I.E.L.D. trait, which I am looking forward to seeing in more action down the line.

Breaking down the stats of this card, beginning with his cost, 4 cost is….. a little high. He is an arena full of solid 4 cost allies, Nick Fury, Luke Cage, and Vision, to name a few. Despite his 4 cost though, I do not think that is a big roadblock given that we have Avengers Tower and Team-Building Exercise to bring down his cost. Not to mention, other resource generators.

So what is he bring to the table for 4? Quite a bit. He is bringing 2 THW, 2 ATK, 3 health, Ranged, and Toughness. Pretty solid stats, in the upper range, if you ask me, but not OMG, MUST PLAY. Toughness is an effect I love in an ally. It allows that ally to soak up two attacks before leaving the board or if you choose, a free attack or thrawt. It’s like he has 4 health, but better. Ranged is another bonus you are getting. Although we do not have many enemies with Retaliate yet, this is great to have against those annoying baddies that hurt like MODOK. I’m sure we will be getting more enemies with Retaliate in the future and this card opens up the door for every Hero to have a way to get around that. 3 health is a bit rough, but when you look at the fact that you are getting what you are getting, 1 extra THW/ATK, Toughness, & Ranged, it’s well worth trading the extra health for. Finally, this brings us to his THW and ATK. 2/2 is just great. 2 THW is really effective on schemes and with 2 ATK, you actually feel like you doing something to enemies.

I love getting new allies and I can say that I am not disappointed about this card, despite my first reaction. Right away it’s going to go into Leadships-Avenger decks, or at least be a strong option. Its tool nature of being able to get around Retaliate is just great to open up to everyone and I think, will be used more often than not, especially in the Rise of Red Skull Campaign. At the end of the day, I will be throwing him into my Captain Marvel – Leadership deck. He is solid and while he is not a staple, he is great to consider as an inclusion in your deck.