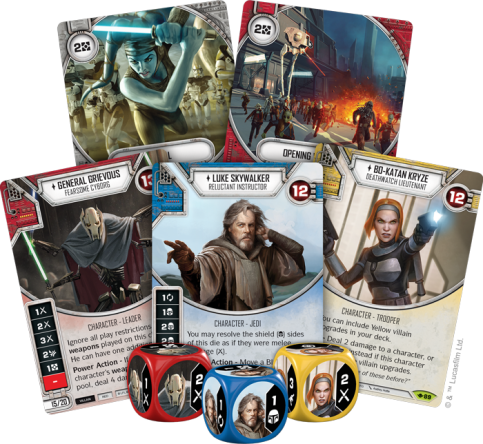 Finally! We have got new information on the next set. It seems like ages ago that we got Legacies, even though the official release date was barely a month ago. And now we have nine new cards to salivate over. Three characters, four legendaries, one plot, and a load of possibilities. As spoilers are released, I’m going to do an immediate take on the cards, followed by possible deck lists featuring the spoiled characters. Feel free to shoot me a comment letting me know if there is some specific deck idea you’d like to see fleshed out.

So, with only nine cards spoiled, I’m happy to see Fantasy Flight digging into their three major new mechanics in the Legacies cycle. The only way to keep the game fresh is to add new wrinkles to the rules. Legacies gave us Indirect Damage, Plots, and Power Actions, and The Way of the Force seems to be following up on those nicely. 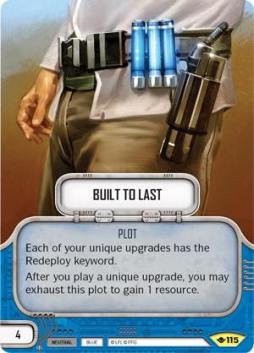 First, we have one spoiled plot. Built to Last costs a whopping four points of your character allotment but its TWO effects may be able to make up for that in the right list. First, all unique weapons have redeploy. Maul’s Lightsaber, Rey’s Lightsaber, Obi-Wan Kenobi’s Lightsaber… okay, people’s sabers can now be redeployed. That’s huge! Plus people’s staffs and guns and possibly more to come. Second, when you play one of these, you can exhaust the plot to get one of your resources back. This effectively reduces the cost of all of these to two, with the small caveat that you have to have the extra resource up front. Still, this could see some play in the right decklists. Four points is steep, but it’s way better than paying three points for one resource on turn one.

That’s just card one. We have three hero and five villain cards left in our first taste of the new set. Bo-Katan Kryze has a similar ability to the first Finn. She lets you include villain weapons in your deck, which is pretty cool. I’d like to say this would open up some interesting scenarios with the Built to Last plot. However, at 15/20 points, I don’t know that she’s worth it at all, let alone with four points of plot dedicated to the list. She’s got a three ranged side that doesn’t require a resource cost. That’s not too common. However, she’s got a two melee, and an underwhelming special. At first glance, she’s way overpriced and her dice aren’t all that great to begin with. I’d have to come up with some seriously killer combinations of villain and hero weapons in order to think she’s worth including. It’s a cool concept, but as we’ve seen time and time again, overpriced characters are nothing more than binder fodder. When’s the last time you played against someone using Jyn?

Our last two hero cards are from Luke Skywalker. We are getting our third Luke, but they are all different enough to warrant inclusion in the game. This Luke and his Lightning Rod can use their sides as either melee or shields. This provides some pretty interesting options, at the first glance thought is a pairing with Qui-Gon. However, with Luke at 12/15 and Qui-Gon at 13/17, one of them would have to be one die. I’m sure there will be some other pairings that make more sense as we have time to digest the new cards. So essentially, Luke has three damage/shield sides, a focus, and a resource. That’s not too shabby. Given all of the shield cards we have gotten over the last two sets, Luke’s versatility is bound to see some play. His lightning rod die gives three melee/shield sides, one hard shield side and a resource, and it only costs two. That’s some pretty good value as well. Luke is a legendary but his rod is only rare, so that’s good news as well.

So that’s it for the heroes. Before we get to my favorite two cards (and my least favorite card) of the new spoilers, let’s look at two yellow villain upgrades that are vying for a spot in your decks. Underhanded Tactics looks like a hard pass for me. It has two +1 ranged sides, a discard side, and two special sides. However, whoever came up with this special was just looking for a filler card. You get to do one indirect damage and then resolve another die. I can see some very specific situations that I’d like to have that special, but by and large, this is a waste of cardboard. As I’m writing this, I know I’m likely jinxing myself and this card will show up in decklists everywhere just to prove me wrong, but I really don’t see the value. 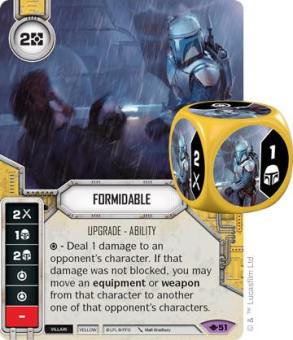 Formidable seems like it could be the cause of some nasty plays and is likely deserving of its legendary status. So you start off with a two melee side, a one and a two shield side and two specials. The special is just mean! It lets you deal one damage to a character. If it isn’t blocked, you can then move a weapon or equipment from that character to another character. If you can couple this with other specials, you could move a weapon off of a healthy character to a dying character and then finish the dying character off. This would be especially evil if that die were already in the pool. Imagine staring down a +4 on a Maul’s Saber and then not only removing the die but destroying the saber at the same time. That’s my kind of evil! At a cost of only two resources, I would expect this to see some play.

Saving the best for last, I am in love with the new Grievous card. This card finally captures Grievous’ flavor. I never understood how Rey can sit there triple wielding lightsabers with two hands but Grievous couldn’t use four with four hands. The new Grievous allows you to wield four upgrades at one time. In addition, if you get four weapon dice in the pool, you can power action for a free four damage! That’s powerful. His thirteen health are respectable as well, as he will be an easy first target. My first decklist will be about him, and it’s going to have to find some ways to protect Grievous while those weapons build up. He is 15/20, which is a lot, but you can fit a Royal Guard or Gammorean Guard with him to protect him with two dice, and if you go with one die Grievous, you still get his awesome abilities, and more possibilities open up for partners.

If that weren’t enough, they spoiled a Red event called Furious Assault that let’s you roll all of a character’s weapon dice into the pool for only two. That’s pretty effective if you’ve got four weapons on Grievous. I see a lot of uses and abuses for these two cards together.

It wouldn’t be a Star Wars Destiny set if it didn’t have at least one legendary that made you furious when you pull it. General Grievous’ Wheel Bike is an absolute waste of cardboard. It costs three and it has a mixed damage die. Sure it has a nice two melee and +3 melee side. What it doesn’t have is a way of adding consistency or speed. It’s power action, which lets you roll this die in if you spot Grievous (either one) or pay a resource, is just another slow down to your turn. I really don’t see this getting any play and I’m just terrified at opening a box and wasting one of my six legendaries on this heap. Avoid at all costs. 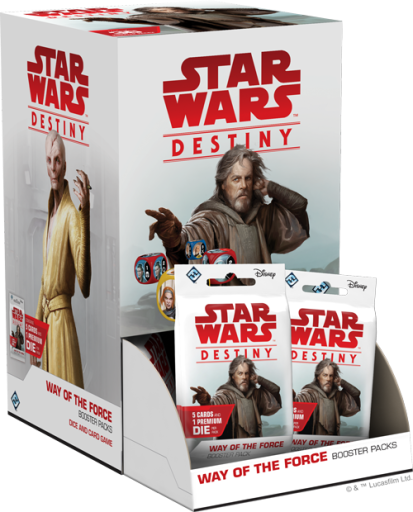 Honestly, I’m rather pleased with the first spoilers. I think Grievous and Luke will both see play, as will Furious Assault and Luke’s rod. Formidable will be a meta call, but will absolutely warrant a second look. Two out of three characters and five out of nine playable cards isn’t a bad first start to the set. Oh, and I didn’t even mention that Snoke is on the box! I doubt he’ll be a character, but it’ll be interesting to see where he shows up. Check back soon for decklists featuring Grievous and Luke as the community starts to process what this new set will mean.

View all posts by serenitynow98

2 thoughts on “Do You Know Da Wae of Da Force?, Issue #1: Reactions to the Announcement of Ways of the Force”