This Ranking article will be like a VS. article, except that we will compare multiple sets of cards against each other rather than just two like She-Hulk vs. Thor. We will look at the newly-released Kree Fanatic modular set in comparison to the other currently-released modular sets focused on a mini-boss enemy: The Doomsday Chair (MODOK), Legions of Hydra (Madame Hydra), A Mess of Things (Scorpion), Power Drain (Electro), and Running Interference (Tombstone). The rankings will go from most-difficult to least-difficult. Click here for our statistical breakdown of all modular sets.

I’m going to rank each of these modular sets in three categories: the mini-boss minion itself, the scheme, and then the rest. Finally, after considering the entire modular set as a whole, I will decide on my overall ranks.

I know that the difficulty of some of these minions comes more from how they interact with their scheme than their pure stats, but we will get to that in the next section and in the overall rankings. For now, I’m just looking at the main minions themselves in a vacuum.

If we were just going with a tier-system, I’d put Ronan, MODOK, and Scorpion in the top-tier, followed by Electro and Tombstone in the mid-tier, and then Madame Hydra in the bottom-tier (again, based on just the minion). Madame Hydra without her side scheme is very manageable compared to everyone else as she has the lowest stats and doesn’t have any additional effects that target the player. Tombstone and Electro can cause a bit more damage when they attack and Tombstone may also force you to lose a card. The other three are hard to separate. Ronan is just a pile of hit points that can put up serious damage and scheme numbers if left for too long. I’m not all that worried by his Forced Interrupt since every hero and ally can always defend for everyone else, so it’s mostly a problem with an unlucky Gang-Up or another Kree Fanatic card that we’ll get to later. MODOK wants to either be one-shotted or softened up with some non-attack damage, but his 8 hit points can make that math difficult to achieve depending on your hero. Sometimes you just have to take 2 extra damage from Retaliate. Scorpion is just the worst. He has a 3/3 stat line to match Ronan, but Quickstrike AND a stun ability? The worst. If you’re playing solo, I’d rather face Ronan with 2 extra hit points and tough but no stun ability. In multiplayer though, Ronan’s hit points can just get out of hand to the point that he’s basically 1/2 a villain stage in terms of the extra damage you have to devote to him. Scorpion’s stun makes players use/waste their attack actions, but so does Ronan’s extra hit points. I think Scorpion can potentially be more disruptive but Ronan requires more of your actions/resources to defeat. I tend to play mostly solo, and I think so do most of the players based on social media discussions, so ultimately I’m going to rank like this:

I tend to consider the Hazard icon (extra encounter card) the worst of the side scheme effects, with Acceleration and Hazard varying depending on the situation. That being said, A Mess of Things is probably the easiest side scheme in the group because it’s rarely going to be more than 2 or 4 threat total. Legions of Hydra, however, is a minimum of 5 threat (unless you get into a weird situation where Madame Hydra has already been dealt as an as-yet-unresolved encounter card to someone) and gets really annoying with its ability to keep Madame Hydra alive for a long time. Doomsday Chair also functions as an extra way to get MODOK out of the deck but, unless it’s the first turn or two of the game or you have a main scheme with a really low threshold, I almost never find it worth removing 8 threat to save just 1 threat per turn. You just have to decide if the game will be over in 8 rounds or less once it comes out. Judge, Jury, and Executioner is my favorite side scheme design to-date. It’s nearly impossible to avoid and can really make defending with an ally a tough decision to make. Power Drain is usually reasonable but has the potential to completely wreck your next turn. Running Interference is a tempo hit but probably not as big as Power Drain. I would rank them like this:

As the largest of the modular sets under consideration, Kree Fanatic gets to have a little more variety here. The Accused is another design I am very fond of as it’s nearly impossible to dodge and the effect adds up after a while. That’s assuming you remember to apply the effect every time, every attack (villain and minion). It’s up there now with one of my most overlooked card effects. And the fact that you can only get rid of it by finding and defeating Ronan is pretty cool. House rule: you must shout “J’accuse!” when you attach this card. Bring The Hammer Down and “You Dare Oppose Me?” both have boost effects that punish you for defending with allies and accelerate you towards Ronan if he’s not in play already. Also, don’t sleep on the number of Boost icons on these cards. Thematically, this is easily my favorite modular set now. 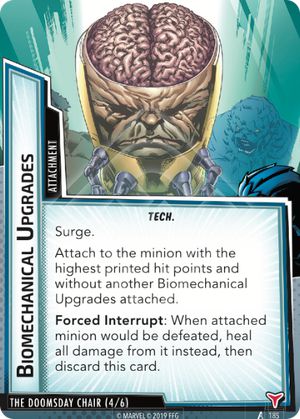 Check out the big brain on Brett! This is just so annoying when it attaches to MODOK, as it usually will. When that happens, I usually just give up dealing with MODOK and try to tank him for the rest of the game. Does that, combined with my earlier strategy of ignoring The Doomsday Chair, cause me to lose some games based on my own inaction? Yes, yes it does. If this ends up on any other minion it’s usually just a minor speed bump, but of course the card has Surge because this is a Caleb Grace game so it’s never a dead-draw. Hopefully I never run into this card while playing Thor and have Loki on the table… 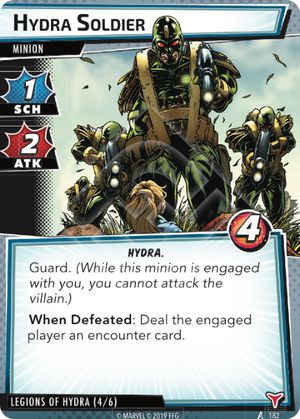 Speaking of annoying, these guys take the cake. You can’t ignore them in Alter-ego because they scheme, you can’t ignore them in Hero because they have Guard, their attack is not insignificant, they have just enough hit points to be out of range of most basic attacks, and then finally they replace themselves when defeated. A Hydra Solider train can be infuriating. You take one out just for another one to pop up in it’s place. It’s like pulling the tail off a lizard, or a leg off a starfish, or …there’s gotta be another analogy.

Gang-up from the Standard encounter set can end games, so why not just add another copy? Tail Sweep is a Stun 9 times out of 10 (and there’s 2 in the set). This really makes the extra threat for A Mess of Things more likely, but these cards are pretty bad in their own right. Both of them are pretty high candidates for cancellation for me if I have that ability in my deck.

So you’re a little more likely to face Electro and collect Acceleration tokens due to these cards, but that’s really not a huge problem to me unless you’re playing a slow deck against a scenario that already churns through the encounter deck (Klaw, anything Heroic). These can even lessen the effectiveness of bad encounter cards like the Expert encounter set or Shadow of the Past as they are slightly less likely to be revealed or come up as Boosts.

If you’re playing an Energy-focused deck or even a Physical-focused deck, these can be back-breaking. If you have the mental resources, though, these mostly just slow you down by a couple of cards. These cards probably scare me the most in theory, but if I’m being honest, I’ve never really run into the nightmare scenarios these cards present. I do like that they’re in the game, however, just to keep energy-focused decks honest.

My rankings of the rest of the modular sets:

This was a tough call. If I was only going to make tiers, I’d make the top-tier Kree Fanatic, Legions of Hydra, and A Mess of Things. Kree Fanatic adds a lot of high-impact Boost abilities to the encounter and punishes you for defending with allies, which has been one of the most effective strategies in the game up until this point. There are few ways to avoid dealing with Ronan every trip through the encounter deck and, at higher player counts, his hit point total siphons off a lot of the damage that could be going on the villain. A Mess of Things is probably the most impactful in solo play and primarily wastes your actions/attacks, but I’d argue that Legions of Hydra is the bigger drain on player actions overall. The fact that you can face Madame Hydra up to three times in just one trip through the encounter deck, and that her scheme has two copies which are far more difficult to deal with than A Mess of Things, means that overall I think Legions of Hydra is more difficult. For Solo play, I almost see all three of these as equal difficulty with just different emphases (Kree Fanatic = ally hate, Legions of Hydra = tempo advantage for the encounter deck, A Mess of Things = wasting attacks).

For the mid-tier, I think The Doomsday Chair is here all by itself. MODOK is a little easier to ignore than Scorpion, and the scheme is easier to ignore than Legions of Hydra. If you’re playing with non-attack damage sources (Black Widow’s preparations, She-Hulk‘s flipping, Squirrel Girl/Hawkeye/Nick Fury, etc) then I think it makes sense to just take him out before Biomechanical Upgrades gets revealed, otherwise he’s definitely a problem but a less dire one compared to the above three modular sets.

Finally, the bottom-tier, easiest modular sets of this category for me are Running Interference and Power Drain. Both have the potential to set up some really bad situations for you, but for the most part I think they’re quite manageable. I have a feeling this is slightly controversial but, I give the slight edge to Running Interference because I’m more afraid of essentially losing a turn or getting a bad encounter reveal doubled on me than I am of slightly-accelerating the encounter deck. And even in situations where Running Interference doesn’t set up the worst possible situations for you, it is causing you to waste your cards and most likely screw up the lines of play you were hoping for. Power Drain may actually just whiff and even get rid of some of the worst encounter cards for you.

So, finally, here is how I would rank the difficulty of each mini-boss modular set:

If you enjoy this article and would like to support this writer, please check out our “Support a Writer” tier over on our Patreon page and select jbailey86.