“You’ve taken your first step into a larger world.”

My name is Ron Longhi (aka “Gold Leader”). This is my first of hopefully many articles to come, so I thought I’d start by giving you all a “lightspeed-quick” background on me (and why you may want to actually keep reading this article)…

I’ve been playing tabletop games since I was a kid with games like monopoly, risk, and clue. In 1994, a magical game (pun intended) entered my life…Magic: The Gathering – this was my introduction to competitive CCG’s. Since then I’ve played competitively off and on through the years, winning a handful of large-scale events. Nowadays, though, I’ve drifted more towards the casual gameplay environment and RPGs.

I’ve been a Star Wars fan since I was 8 and my dad rented the entire original trilogy on VHS for us to watch together. After watching A New Hope and Empire Strikes Back, my mom said I had to go to bed…but, of course, once she went upstairs I snuck out of my room to watch Return of the Jedi. My love for Star Wars has only grown since that fated day when I was introduced to “a galaxy far far away”.

When Fantasy Flight Games (FFG) acquired the Star Wars license in 2012 and started pumping out lots of games, I decided to create a Star Wars community known as Gold Squadron. My goal was to bring locals together who shared the same passions I did – gaming and Star Wars. Over the years, I worked closely with local game stores and FFG on all levels of organized play, from in-store events to the annual World Championship at FFG headquarters in MN. Within a few years, our little Gold Squadron community grew to have a national following, and our competitive events drew players from around the world.

In 2019 when FFG merged with Asmodee, many of the games I loved were sidelined indefinitely or canceled all-together. This caused me to change the way I participated in the Star Wars community – instead of finding a new game or continuing to play games with little to no support, I decided to go back to my favorite Star Wars game of all time… the Star Wars Trading Card Game (SWTCG)!

SWTCG was made by Wizards of the Coast (WOTC). The first set – Attack of the Clones – was released in 2002 in conjunction with the movie. From the beginning, SWTCG was marred with controversy as WOTC really only acquired the license because its main rival produced the Decipher Star Wars Collectible Card Game (SWCCG). SWCCG was so beloved by its fans that they felt slighted by WOTC for causing the capitulation of their game. This is a big reason why SWTCG never got the exposure it deserved.

That said, while they sound similar, SWCCG and SWTCG could not be more different. SWCCG is an incredibly deep, complex, and thematic game with a less than stellar combat system. Anyone interested in a game this granular can truly find no comparison. SWTCG, by contrast, is a much simpler game almost entirely focused on a battle system that is also extremely thematic, as the core system is designed to recreate those epic battle scenes straight from the movies.

SWTCG employs a unique 3-Arena system of Space, Ground, and Character. The way I always describe it to new players is to think about Return of the Jedi…In Space, there is a massive battle happening with fighters and capital ships. On the Ground of Endor, there are troops and speeders engaging in combat (Yub nub!). And finally, on the Death Star, we see the epic Character duel between Luke Skywalker and Darth Vader. (I mean, really…how much more thematic can you get!?)

You win the game by controlling 2 of the 3 Arenas at the end of a turn. Players battle in these Arenas by deploying their favorite unit cards to fight, vying for control. Unit cards are various ships, vehicles, legions or troops, and characters from across the Star Wars universe. For players to gain control of an Arena, they must defeat all of their opponent’s units in that Arena. Units attack in order of speed, with the faster units engaging first, and the Dark Side always wins ties (you don’t know the power of the Dark Side!). You can support your units through the use of Battle and Mission cards. Battle cards allow players to tap into the force for a powerful one-time effect, that can turn the tides of an engagement. Mission cards also grant players a powerful one-time effect, but at the cost of deploying fewer units. And of course, like any Star Wars game, the force also plays a compelling role, fueling force-sensitive characters and Battle cards which can easily change the outcome of a battle for an Arena. 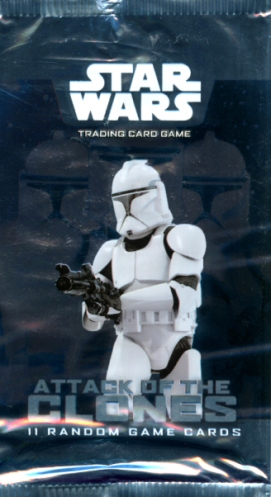 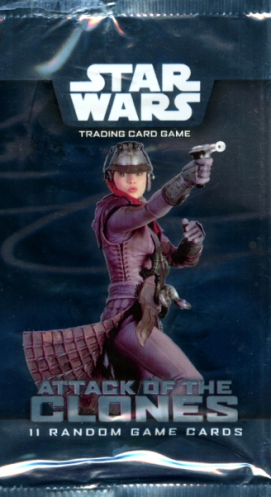 Attack of the Clones

Now let’s delve a little bit into that first set – Attack of the Clones! As I mentioned, this set was released in conjunction with the movie, and many of its notable moments were pretty well-captured by the designers (even though they hadn’t actually seen the movie before the set was finalized). Darth Tyranus (A) features card art from a deleted scene where he dual-wields with a red saber in one hand and a blue saber in the other. Yoda (A) is noticeably slow in comparison to the other Jedi, but honestly, who knew he could tap into the force and move with incredible speed and agility?! Yoda’s cards are also “flavorful” as all the text is written in his famous backward talk (judge me by my size do you?)

Even though more powerful cards were released with each subsequent expansion, there are still quite a few cards from that first set that remain viable (even critical) to many competitive decks.

Playing a deck comprised entirely of cards from the Attack of the Clones set is the simplest and best way to pick up all the basic mechanics you need to play SWTCG. Added benefit – these decks also tend to be very thematic with their game-play.

Once you’ve gotten through the first set, expand slowly to the other 9 WOTC sets for even more thematic Star Wars fun! But it doesn’t end there…since SWTCG was canceled in 2005, a community of players called the Independent Development Committee (IDC) has continually produced awesome fan-made content. To date, they have made 30 additional sets spanning all eras of Star Wars.

All right, you’ve read through this whole thing and I know what you’re thinking…“How and where can I play SWTCG?!” The IDC is the best way to engage with other players. You can follow/join the community and play with us online using Lackey (links for Discord, Facebook, Lackey, and other useful stuff down below).

If you’re interested in some casual organized play, the IDC is hosting a Beginner League starting June 1, 2020 where players can initially build, explore, and play decks with cards exclusively from the first set, Attack of the Clones. Then, each month we’ll open up the next WOTC set to expand the card pool and allow players to improve their decks or just make new ones! This League will be very casual and is truly intended for new players.

Well…thanks to those of you who made it this far! I hope you found this to be enjoyable and helpful as you start or continue your journey with SWTCG. Join us next time as we discuss content, decks, and strategy from Sith Rising – we’ll specifically look at Darth Maul (A) and Mace Windu (A).

This is Gold Leader, signing off…

Links and other good stuff:

View all posts by goldleader2596