FFG Live held a live stream yesterday, April 2nd 2020, with Evan Johnson and Michael Boggs spoiling cards and details from the upcoming Rise Of Red Skull story box for Marvel Champions. It was then followed up by this article on the FFG page. Let’s go through some of the big reveals and what implications they hold for the future of the game.

One of the heroes included in the box is Spider-Woman/Jessica Drew. This was suspected based on the leaked box art from GAMA but what was not known until now is how the hero will function when played alongside Captain Marvel/Carol Danvers. Captain Marvel has Spider-Woman as a signature ally that must be included in her deck, and many expressed the hope that the story box would come with a replacement card such as those included with Arkham Horror novellas to avoid conflicts from the uniqueness rule. Others thought that the solution was already baked into the rules because you could just spend the ally as a resource, no special consideration necessary. Personally, I assumed the answer would be somewhere in the middle where they didn’t print any replacement cards but would create some new interaction for an ally card that matches a hero already in play, such as it generating an additional resource or something. It turns out the more strict solution was the correct one. Michael Boggs confirmed that there would be no new replacement cards, and the Captain Marvel player could just spend their Spider-Woman ally as a resource.

The mirror image of the above situation was the question of if and how a scenario could be designed that features a villain that had already been printed as a nemesis minion. Again, it turns out that the solution was already present in the rules. Currently, the only way for a nemesis minion to enter play is through the encounter card Shadows of the Past. If this card is drawn by a hero whose nemesis minion is also the villain of the scenario, then Shadows of the Past will just do as much as it can.

Notice that each effect of the encounter card is a separate sentence, so we’re not dealing with cost/effect or dependent clauses here. So if you are playing Black Widow against Taskmaster (one of the villains in Rise of Red Skull) and draw Shadows of the Past, you will be unable to put your nemesis Taskmaster into play due to the uniqueness rule, but you will still put your side scheme into play and shuffle the treacheries into the encounter deck. As a final bit of nastiness, because you didn’t put your nemesis minion into play, Shadows of the Past will gain Surge despite still putting some other cards into play. Presumably, any future effect that utilizes nemesis minions will have similar wording. This is great news for anyone looking forward to Loki or Baron Zemo scenarios in the future. It does make it slightly harder to bring a hero against a villain who is their nemesis, but that makes thematic sense.

Speaking of Spider-Woman/Jessica Drew, let’s get weird. A feature of this game in the early days is that the deck building is pretty restrictive considering the signature pool which cannot be altered and the option to only choose a single aspect. Spider-Woman breaks that wide open: 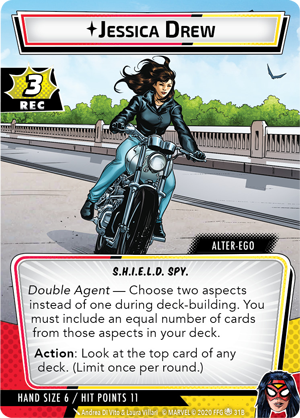 There are still some restrictions in place here – namely that you must choose two aspects, no more no less, and that you must have an equal number of cards of each (so you will have to include an odd number of basic cards to stay at 40 cards) – but there’s still quite a bit of previously unexplored deckbuilding space now opened up. I won’t even try to go into ideas here because there will likely be many months of that kind of discussion and proxying across the various social media platforms. I think we can now assume that, at least every once in a while, heroes will come along that can warp what we think of as the usual deckbuilding rules. Perhaps we could eventually see heroes allowing off-aspect cards provided they meet certain restrictions on type, trait, resource icon, etc. Hopefully it will be very rare, however, else the single-aspect heroes could start to feel outdated.

Another paradigm-shifting feature of Spider-Woman is that she has signature cards which are also aspect cards. This is obviously mainly to support her hero ability, but it should be noted they will also allow things like “Power of” cards to interact with signature cards for the first time. Could we perhaps see future cards that belong to multiple aspects? The part of me that obsesses over my card storage system shudders at the thought.

There was not a whole lot of information given away about exactly how campaign play will work, but I feel confident in making a few inferences. It was stated that this campaign mode will not be as deep as Arkham Horror the Card Game, and it was mentioned that the way your deck can be upgraded through the campaign is by getting the chance to add campaign-specific player cards to your deck. This sounds a lot like the Lord of the Rings Boon and Burden cards from that game’s Saga mode, so I will assume for now that Marvel Campaign Mode will function very similarly to LOTR Saga Mode – meaning you can earn a few special cards to add to your deck but your deck building is otherwise untouched by the campaign rules. It was also mentioned that there would be a Campaign Log and a reference was made to accruing “Delay Counters” in the Absorbing Man scenario that would affect subsequent scenarios. There will also be an Expert Campaign Mode which will feature heroes carrying over their Hit Points from one scenario to the next, so presumably Standard Campaign Mode will not feature this.

I think it is safe to assume that when playing Campaign Mode, we will keep the same heroes (whether or not there are provisions for players dropping out or joining is unknown) but I would bet that the cards in your deck could change without restriction between scenarios unless they make you keep the same aspect. Rewards and penalties will be handled by giving you optional positive cards or mandatory negative cards to put in your deck as well as counters or other information stored in your Campaign Log that can affect future scenario setups or card effects which will not be as complex as the branching narratives in Arkham, but rather the more simplified variety as in LOTR (something like “Setup: place X additional threat on this scheme equal to <some number from the Campaign Log>”). It’s also possible that the modular encounter sets could be used to adjust scenarios based on previous scenario resolutions, but with only three modular sets in the box this would likely be minimal. I think it is unlikely that the campaign will feature lots of replayability due to multiple resolutions or story paths, but will just feature some otherwise inaccessible cards that add some flavor to your plays and, through Expert Campaign Mode or some self-imposed restrictions, will allow for an additional level of challenge not previously available. Hopefully the scenario design will continue to evolve in this box just like the hero design. More articles previewing the scenarios are to come on the FFG website.

It was also stated that any of these scenarios could be played standalone outside of a campaign.

Ranged: ignores Retaliate
Piercing: removes Tough status before doing damage
Ranged and Piercing are both cool interactions that seem necessary for the game and indicate we could someday get things that remove/ignore other status effects or negates Guard. Evan said there were five new keywords total in this box, so the other three have yet to be seen.

The above image comes from the end of the Rise of Red Skull preview article. As of the time of this writing, I have not been keeping up with the online communities for the game so I haven’t seen what guesses people are making for these silhouettes. I guess I’ll go out on the limb with mine and say:

Bonus Prediction: if my November and December guesses are right, then the following Story Box to be X-Men with Wolverine (Aggression) and Beast (Justice)

I will update the Expansion Guide soon after this article goes up with all of the new information we now have, and will continue to do so as further previews come out.