We conclude our Spark of Hope review by looking at the Yellow and Gray neutral cards in the set. As has been customary, I’ll continue using a 4 point rating scale with the numbers generally representing the following:

3 – Solid card that could be very effective in the right build and fun to build around.

2 – Very situational card that will need the right deck and matchup to shine.

As a reminder, I like to look at cards both from their potential use in both casual and competitive settings. Feel free to agree or disagree with my thoughts about cards, just please do whichever in a respectful way.

It’s not surprising that they made a 2 cost mass removal card that can be used on resources since they’ve made similar cards for damage types, etc… It’s a bit surprising it’s neutral Yellow rather than Gray like other mass removal cards. Right now it’s hard to see this seeing much play, but with the newly spoiled Construct the Death Star plot that will come out in Set 9 relying on dice showing resources, maybe this could see some use if Death Star constructing decks become a thing. I doubt it though.

Another card that just seems below the line. It costs 2 and there are better options for removing supports and upgrades like Desperate Measures and Vandalize, especially since most supports that you want to remove have dice. It can remove a downgrade too, but that doesn’t seem to be enough of a bonus to justify using this. 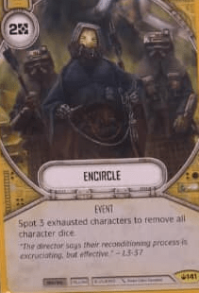 The ability to remove all character dice is powerful, although it will also remove your own character dice and you have to spot 3 exhausted characters to use this. This means it might work best with swarm decks based on diceless characters so it won’t affect you as much. This also might be useful in a DJ deck or an Execute Order 66 deck.

This is a neat card that is obviously meant to work with Mr. Bones since you get a 2 damage increase in his melee damage side for 1 cost rather than just 1 and the damage is unblockable no matter what it’s on. However, you could also get some benefit by using it on an R2-D2 die or Chopper die. Having Ambush is great since you can get to deal the extra damage and then take another action.

This should work well in decks centered around the diceless characters that share subtypes as long as the deck includes Yellow. In those cases you should easily be able to get at least 1 resource and for Ewoks or Witches, this card might get you 2 resources at times. It’s nice that there’s no benefit to your opponent when you play this cards unlike Truce and Well-Connected, but you definitely have to have a specific type of deck to get full value for this card.

The Yellow card that gives you 3 options doesn’t seem quite as good on the surface as Clever Distraction and Off the Sensors. Being able to reroll some of your opponent’s dice might be useful at some time. The second option is basically paying 1 to disrupt them for 1. The removal option may be the best one of the 3 because leader is a common subtype, but this card seems a bit too narrow and there are probably better options for yellow.

Maybe you could play this in Draft or Sealed when you have no other options and there tends to be less removal, so you could roll a bunch of times and try to get what you need on a particular die. At least you can use it offensively or defensively, but this one is probably staying in the binder. 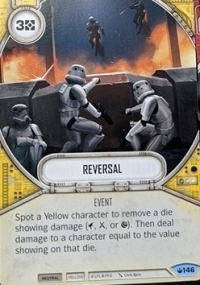 Another reprint that was fine to include and bring back. It’s certainly good to remove a die and deal damage at the same time. You could get great value if you use it to remove something like Vader’s Fist, but unless you’re running a lot of Yellow events and using Streetwise to help discount them, there are probably better removal options now. 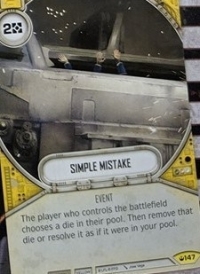 So basically to get any effect from this you’ll need your opponent to have the battlefield, then unless they only have 1 die in their pool, they’ll get to choose what you can remove or resolve against them. Seems like way too many conditions to get any benefit or use out of for 2. 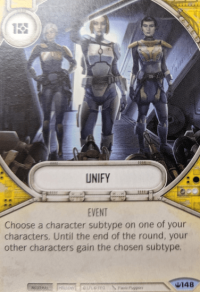 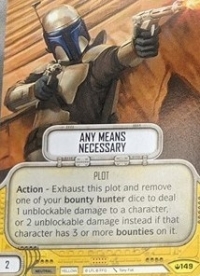 Sure, it could be guaranteed unblockable damage if you remove a bounty hunter die and seems thematic, but it definitely seems to be a card meant for a casual deck. 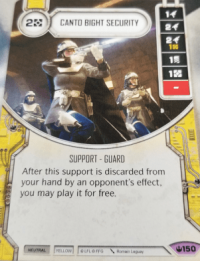 For 2 cost, this is a decent support. It has 3 damage sides and a resource. Being able to play it for free if it’s discarded from your hand by an opponent’s effect is interesting and against mill that will be great. Also, there could be some clever plays to take advantage of that in certain matchups. For example, anytime your opponent plays a card or activates an effect like Dooku3’s Power Action that gives you the choice of discarding a card, you could choose this one and then immediately play it for free.

This 2 cost support doesn’t seem like anything special. The 1 ranged and 2 indirect damage sides are a bit below the curve. Being able to activate and also deal 1 indirect damage as a response to losing resources could be useful, but whether or not you could ever use that ability is dependent on what your opponent is playing. Plus, the card may also be easy for them to play around.

At it’s worst, it’s a free equipment that gives you +1 health and makes someone a bounty hunter if they aren’t already. The new Jango Fett will love this card though since it won’t count towards his limit and, if you play it first, nets you a resource when you play it. 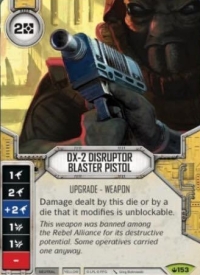 This is a nice 2 cost range weapon. It has 3 damage sides although 1 of them is modified, but it has the post-errata Vibroknife ability for range dice in that damage dealt by it or by dies it modifies is unblockable. If shields make their way back in the meta, this card’s value will go only go up.

Seems like it could be situationally good. The card could be used to finish off a game if your opponent only has 1 character left. If it’s discarded from your hand you get it back which is nice. Could also see using this in a Nightsister Zombie/Vow of Vengeance combo deck since it would help you kill off Zombies for the Vow bonus.

For 1 cost, this is decent value as a droid upgrade, especially since it has 2 damage sides on it including a 2 modified melee side. It also has the extra ability that you can remove the die as an action to discard a trap from play, which could be useful if Ewoks become a thing. Could be really useful with R2, Chopper or Mr. Bones.

The sides on this die are all good for the 2 cost. The action though is going to be a bit risky. You can activate the Droid this is on and resolve all its character, support and upgrade dice, but then you have to discard the upgrade.  That means if you don’t roll well, this might not be worth it.

As far as battlefields go, this one is pretty interesting. As a power action, you basically get to gamble to get more resources like with Watto. Works really well in decks that have lots of the same values and symbols in their dice. Someone like Anakin2 with his 5 sides that have 1 value and 3 of them being resources has good odds of being able to use this to help generate a lot of resources.

Another battlefield that lets you gain a resource upon claiming. With a bounty hunter on your team you could also make your opponent lose a resource if they still have some when you claim and that can sometimes come in handy. 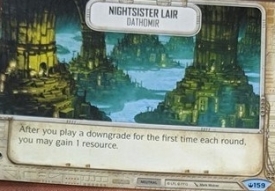 Gaining a resource the first time you play a downgrade each round is good value for decks relying on bounties in particular. The nice thing about this battlefield is that it is very likely to benefit you, but not your opponent since you can build a deck based around it.

Obviously meant to work with Kylo3 and Rey3. Very thematic in that regard. Like some other cards that seemed to specifically be designed for Kylo and Rey, this could be useful in Draft or Sealed where you would also potentially have both heroes and villains on the same team.

Well, that took a while. It takes some time to type up thoughts on 160 cards, but I want to thank I Rebel for allowing me to contribute my thoughts. Also a big thanks to anyone who took the time to read all these reviews. I appreciate those of you who did that.

May the Force be with you!