We continue our look at Spark of Hope by focusing on the Yellow villain cards and one Grey villain card in the set. There seems to be a push to give bounty hunters more tools and options which could make for some fun and thematic builds.

As mentioned in the introductory article about Blue villain cards, I’ll be using a 4 point rating scale with the numbers generally representing the following:

3 – Solid card that could be very effective in the right build and fun to build around.

2 – Very situational card that will need the right deck and matchup to shine.

As a reminder, I like to look at cards both from their potential use in both casual and competitive settings. Feel free to agree or disagree with my thoughts about cards, just please do whichever in a respectful way.

Onto my thoughts and ratings!

4-LOM is an interesting character. He’s a bounty hunter and droid so you can build around him with those subtypes in mind. If you run 4-LOM with a Red character you get access to Automated Defense for removal. If you pair 4-LOM with Grevious3, he gets a 1 point discount which could lead to a potential 3 character rainbow team of those two and Sentinel Messenger where you would have a 4-die start with either Grevious3 or 4-LOM as your elite character. He can deal a reasonable amount of damage for his cost and 12 health means it will be tough to get him off the board. He also allows you to recycle bounties back to your hand which may have some use in a bounty based deck. Thematically, you can pair him with Zuckuss and have 2 points left over for a plot like Any Means Necessary or Double Down, which seems fun to try.

I really like the look of IG-88. His 17 point elite cost makes him look like he could work really well with Elite Snoke. He’s got 3 big damage sides, although 1 is a pay side and a Power Action that can hit multiple characters for serious damage as long as you spread put bounties on multiple characters. Like 4-LOM, IG-88 is a bounty hunter and droid which opens up card options based on those two things.

As suggested by his subtitle, Jango seems meant to work with the newly reprinted Armed to the Teeth. Much like Palpatine3 does with abilities, each equipment upgrade on Jango2 does not count towards the upgrade limit giving him a built-in Custom Bandolier. On top of that, the first time you play an equipment upgrade on Jango each round, you gain a resource which can help you load him up quickly. If you pair him with a Blue character, Jango will have access to both Fatal Blow and Armed to the Teeth to be able to do some serious damage. He’ll also be able to get the maximum benefit from Bacta Therapy since it should be fairly straightforward to get at least 5 upgrades on him. His own die sides are decent for his cost with 3 damage sides and 2 resource sides, but any deck he’s in will feature and rely on upgrades. Spark of Hope includes Gauntlet Rockets which is an equipment upgrade with 4 damage sides so that should help. Whether that will be enough to make Jango competitive, only time will tell, but he looks like he has the potential to be really fun. 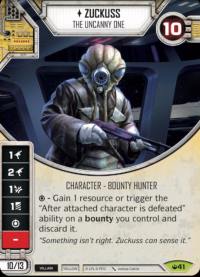 At 10/13, Zuckuss may have competition as a support character given others with similar point costs. He would pair well with IG-88 if you want to go with a full 30 point, Yellow villain, bounty hunter team. His special is interesting since it can be used either to gain a resource or basically collect the effect of a bounty before you actually defeat a character. That would pair especially well with a bounty like Enticing Reward to play a weapon or equipment from your hand for free. It’s sort of amazing that there aren’t any specific Yellow villain bounties in this set considering the 3 of the 4 yellow villain characters have bounty related effects.

Armed to the Teeth: 3

This card was always a great damage from the hand way back in the Awakenings meta and the reprint here is clearly meant to turn Jango2 into a damage-dealing beast.

After a long time of having only limited options for support removal, we get another option here with this card. The only real shame about this is that it’s a villain card so heroes won’t have access to it, in general. Dealing yourself 3 indirect damage to remove an Entourage or 4 to remove a Megablaster Troopers, or 5 to remove a Vader’s Fist, will almost always be worth it since those big supports can crank out way more damage than that over the course of a game. If you happen to put out some Bubble Shields to absorb that indirect, even better.

Top players may figure out a way to maximize the effect of this card. Clearly, you’ll want to put cards from discard back on your opponent’s deck that will not come back to haunt you, but may not be worth a slot in a deck.

Much like the now rotated out Relentless Pursuit, this 0 cost event lets you move damage around on your opponent’s character, but the character you move the damage to has to have a bounty on it. Having Ambush is great with this since you could potentially move the damage to a character then finish it off by resolving damage dice (or something like Armed to the Teeth) with your extra action. Should make the cut in a bounty hunter deck, but it’s a bit limited in that regard.

This free support will fit with a bounty hunter deck. It helps you keep tempo by being able to activate one of your bounty hunters after you play a bounty and you can do that multiple times in a round if you have multiple bounty hunters. Being able to put more than 3 downgrades on a character can help trigger effects from cards like Hunt Them Down, Gauntlet Rockets and the Any Means Necessary plot, but you have to build with that in mind.

This is a solid 3 cost support that synergizes well with IG-88 since it removes the resources cost on the 3 for 1 damage side. Since it gains bounty hunter if you control another bounty hunter, it could actually trigger off Bounty Hunter’s Guild. 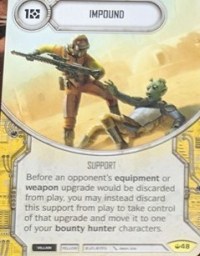 This card is thematic, but it’s too narrow, especially for 1 cost and having to discard the support after you use its ability. There’s no guarantee your opponent will even have weapons or equipment to take control of, so it’s hard to see this card seeing play.

For 2 cost, you get a support that helps you keep tempo since you can activate it after you activate a bounty hunter. That could let you get a lot of dice in the pool pretty quickly if you have IG-2000 out too. Not surprisingly, this card has thematic text that gives it bonuses for spotting 4-LOM and/or Zuckuss. 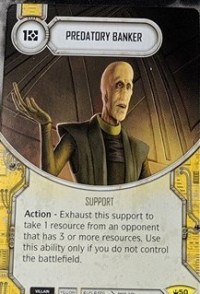 It hits on theme by being able to take a resource from your opponent, but it’s way too conditional since your opponent has to have 3 or more resources and they have to control the battlefield in order for it to trigger. 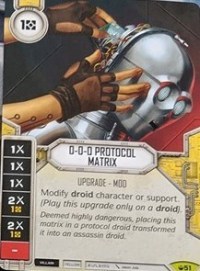 Should be an auto-include in Aphra based decks as you’ll want to put this on 0-0-0 or BT-1. This cheap upgrade can go on droid characters or support, which is an interesting mechanic since there really haven’t been upgrades before now that could go do that. It has 5 damage sides for 1 cost and even though two of them have pay sides, that’s still decent value considering the flexibility.

Glad this got reprinted. Being able to block 2 damage is always good and with the addition of Riot Shield to the game back in Convergence, many villain decks will be able to include 4 damage blocking cards. It’s not Force Illusion, but it helps. Jango2 is glad to see this since it won’t count against his upgrade limit.

Another upgrade meant for Jango since it’s a hefty damage-dealing equipment upgrade that won’t count against his upgrade limit. The sides are great for dealing damage and, in a bounty based deck, you’ll be able to manipulate the die side some depending on how many bounties you have on the character you’re attacking. 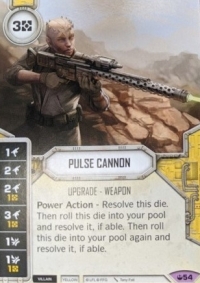 I have to admit, this upgrade worries me in terms of its ceiling. The ability to resolve the die once, then reroll it and resolve it two more times via the Power Action could result in some very big damage swings, especially if you can set up the side you want to resolve on the first resolution via focus or other dice fixing cards. If you get lucky on your rolls and have the resources needed, you could deal 9 damage with its Power Action and there’s nothing your opponent could do about it. It does have 3 pay sides, but resources may continue to be easy to come by. If this die is in the pool, your opponent is going to have to consider controlling it before you can resolve it no matter which side it’s showing or risk getting hit for a bunch of damage in one shot. 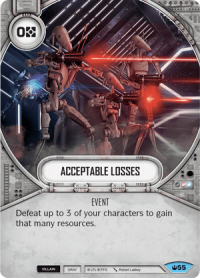 I could see this being useful in a Blue/Yellow Nightsister Zombie based deck or other decks that relies on cheap diceless characters in the future. Otherwise, I can’t imagine using it. Very situational and deck dependent, but any card that can generate 3 resources could have some potential benefit in the right build. Could be really interesting in draft if you build a team with a few diceless characters and can have them absorb indirect damage before you use this.

Thanks for reading. In the next review article, we’ll switch sides and give our thoughts about the Blue hero cards in the set. May the Force be with you!