Despite being one of the last National events in the WOTF(Way of the Force) meta, Australia had some interesting results. Day 1 saw 55 players duke it out with most of the field being either on a Kylo – Tormented One variant (around 14 Snoke or Pryce flavored) or Hero Blue variant (which included eLuke3/eEzra2/Built to Last, eLuke3/eYoda/Stolen Intel, eYoda/Rey/Ezra2, ePlo/Padawan/Ezra2, and eRey2/eAayla). Snoke vehicles were well represented with eSnoke/Aphra/Battle having 5 players, eSnoke/Ciena/Talzin having 4, and eThrawn/eSnoke having 3.

Pretty standard so far but there was also a resurgence of the old staple eYoda/eHondo (one of my favorites as it won me a regional championship and my deck ended up on The Hyperloops gauntlet), which was well represented at the top tables. There were also the odd DJ/Aphra/Battle as well as some true oddballs like eKylo1/eHondo, eBo-Katan/Jedi Sentinal, eSabine/Rebel Trooper, Rieekan/Anakin/Jedi Sentinel, and one of the top 8 who ran eYoda/Cassain/Rookie Pilot to a 4th place Swiss finish.

The top cut was top 8 which meant most of it need X-1 to secure a spot. Here are the decks that made it. 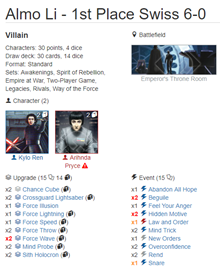 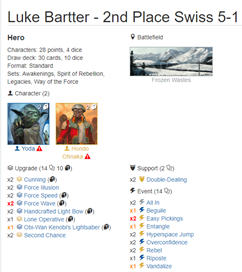 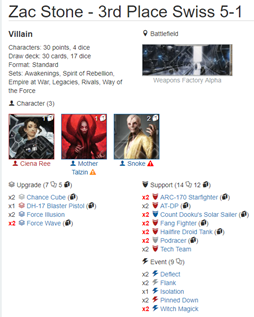 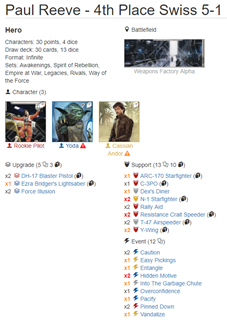 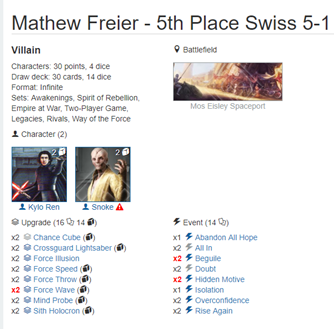 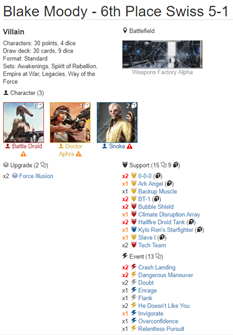 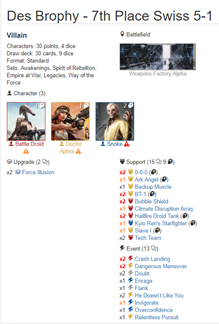 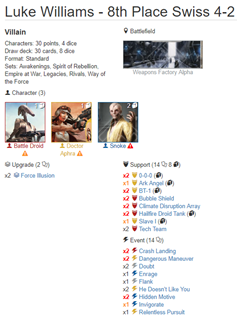 The finals saw eYoda/Cassian/Rookie vs eSnoke/Aphra/Battle which Blake won 2-0 to claim the Australian Nationals Championship for the second year in a row.

Congrats to Blake and the top 8 and now we have Across the Galaxy and a new meta to look forward to, enough of Snoke I say!