The new expansion has been out for a couple weeks (longer in TTS of course) – and I hope you all have been able to toy with it, be it online, in draft or because we are alike and get moved by our cardboard addiction to spend stupid amounts on fresh cards. 😀 So far it is a blast.

While some cards look absurdly good in paper, and other ones not so much, I think we can all agree that a lot of opinions were swapped after practicing with the actual thing. I will share with you 5 cards that have been outstanding to me so far, both in a good and in bad way.

We all knew this guy was good, and that villains needed a pick me up, but DAMN. Almost as good as Yoda, tremendously versatile. His Power Action can really force your options because of the massive advantage it generates. I think he would be the best card of the set if I did not see a trend for decks to go into hyper aggression instead of a heavy control meta, as that 1hp loss can hurt.

PS. Keep an eye for the next set group where a lot of the hero stuff phases out and villains rise – it is going to be Empire time my friends.

Another one competing for the best card of the set. The fact that he can be really good in both mill an aggro decks tells you this is good from the get go. He has what I consider the best type in the game Rogue-Hero giving has access to the best mitigation in the game. Add to that a really solid die with only 1 side you don’t really want as an aggressive deck, the great passive, and you got yourself an amazing card, way better than the movie character.

If you control of the battlefield this equals a 1 action cheat per turn and same action makes it easier to early claim. In my opinion this is one of the strongest effects in the game. There are a couple cards that are similar in nature (Loth Wolf Bond, Partnership, Sabine Wren/Cad Bane/Rey – Force Prodigy, Force Speed to some extent) but none of those cards but Sabine are a continuous threat. If you are using this that means you probably have a deck that is already fast and just improve on that. Combo this with Hit and Run or Quickdraw and an ambush upgrade for a chance to resolve 2 characters worth of dice unmitigated. Won’t go into the math here but lets say it is very oppressive, and the lack of reliable / cheap AOE (Area of Effect) mitigation is more noticeable when you are facing 5 + dice in a single activation. The focus on the battlefield control also makes really good cards like Defensive Position way more reliable.

The con? Guns with ambush are not as strong as sticks and the decks that run them tend to run poor. It is very, very roll dependent, and those few big reach AOE mitigation (Mind Trick, In the Crosshairs, Feel your Anger, Art of War, even Overconfidence) can ruin your turns. 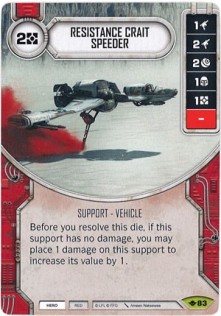 Just as people were thinking (me included) that some hero vehicle builds were going down hard after the Aayla Secura nerf we started seeing this bring them back to relevance. Rose paired with this is just dirty. All sides on this are good, and early game this increases the possibility of creating massive boards on round 1. Just thinking about dropping this for 1 with Tech Team, rolling into a resource side, resolving it for 2, rolling Rose’s special (putting you back at 4), and then dropping another vehicle / upgrade and STILL have money to pay for mitigation without activating your other characters. The fact that Rose can refresh that +1 is just the cherry on top. Insane, insane card. 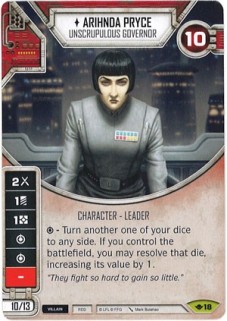 Another really good support villain. We already knew the strengths of this since the reveal: really solid die, amazing synergy with Kylo – Tormented One (a beast by itself) / Anakin – Conflicted Apprentice. I’ve had round 1’s doing 10 damage with this and any deck that can pump 6+ damage per turn consistently is not to be taken lightly. Rolling specials in villain never felt that good. 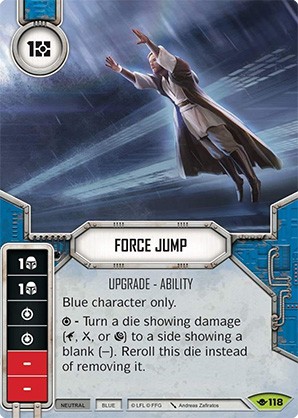 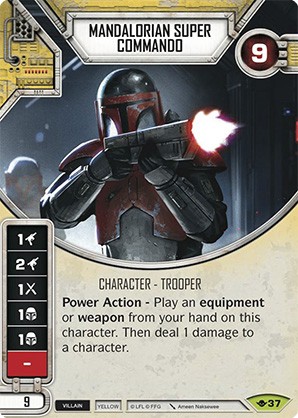 NOTE. Not saying these are the worst cards of the expansion, or bad at all. Just the ones that from theory to practice had the biggest drop for me.

His die is really bad for Guard or Force Misdirection. His Power Action makes it so you have to build your entire deck around it and play a really, really slow style for very little payoff in my opinion – unless you get a lucky combination of cards and rolls to allow to play AND pay for double Force Wave. Build to Last decks have been fun to me but still a bit underwhelming, just as this card.

I was really, really excited about this card as a eYoda/eHondo player. While the chance for a blowout removal is good, against good opponents that don’t overextend it loses a lot of value. And then if your opponent just rolls different symbols (which happens to me a lot) and you are forced to remove 1-2 dice for 3 resources, then it is not efficient at all. 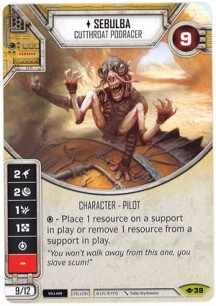 Thinking about massive ramping with this and Remote Stockpile/XS Stock Light Freighter. Meh, that proved to be slow, have low probability of occurrence. His die/health are pretty mediocre and unless we get better synergies I don’t see him making a big impact.

We knew Fifth Brother by himself is really uninspiring. But the Lightsaber looked promising, so it was probably good to build around them! Another meh experience in my testing. Fifth Brother dice is pretty bad, and the lightsaber has a big chance of being unusable, being all modifiers. Would rather use a Maul’s Saber or a Heirloom Lightsaber as my cost 3 upgrade.

I was so excited to include this in my eTarkin/eAphra deck, as another cheap upgrade with some non-indirect damage and the potential to use the dice, bounce it when that character was about to die, then re equipping on my other character and keep all my cheap die for the Power Action. Expensive, slow, not very feasible. While it has no blank sides, I found that the variability of this reduced its effectiveness. Early game I’d rather use the shield/resource/discard sides early on the turn, melee is good with 0-0-0, disrupt and ranged depend on your rolls and what benefits you the most. Any card that requires a combination of multiple 13% odds will tend to miss more often that not. 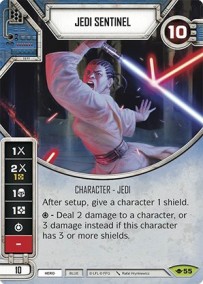 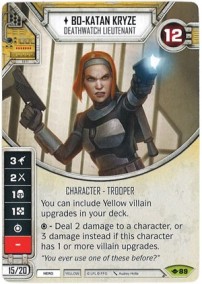 There are a lot. My favorites are:

A few really lame designs, but the frontliners by far are:

BEST CARD OF THE SET

I talked about a bunch of cards that confirmed/exceeded/failed my expectations. But this one is on a different level by itself:

So far this is the card that has defined the meta. By itself it revitalized an archetype that is not easy to pilot and has the tiebreak conditions stacked against it. Her die addressed the main mill weakness, the inability to hit those little hand leftovers and close up games.

And instead it turned it into something terrifying that we had seen with eYoda/eLando but it is now in full focus with Leia – the switch from mill between hitting your deck hard to hitting your hand hard. Even as mill decks in the past worked their magic, you still had options and the ability to reroll and optimize your turns.

We saw with Close Quarters Assault that few things are as devastating for a player’s turn as getting 3+ cards discarded from the hand as the first or second actions of the round. So now we have a cute start of Hit and Run+Commando Raid for 4 discard of your hand, that pretty much just kills your plans for the turn unless you roll perfectly.

And we haven’t discussed her Power Action yet, which gives you at least 1 guaranteed mill per turn.

Add to that the extra blue support in :

Consider all that, and Leia – Yoda is starting to position itself as a tier 1 deck.

As always, thanks for reading, see you next time!

View all posts by daaneskjold

1 thought on “Daaneskjold’s Way Of The Force Picks”