Worlds is arguably the biggest championship for Star Wars: Destiny, granting the winner great prestige and spoils. Today I’d like to take a look at a deck that I believe has the potential to win this year’s championship, the Grand Mother deck (eThrawn – Master Strategist and eMother Talzin – Nightsister Matriarch). This deck has qualities that, in the hands of a skilled pilot, will allow it to navigate to victory and reward its pilot with fame and fortune. These qualities are its ability to plan a round, its consistency, its trap, its action cheating from the hand, and its potential in the hands of a good pilot. 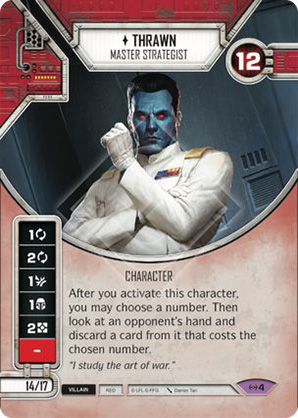 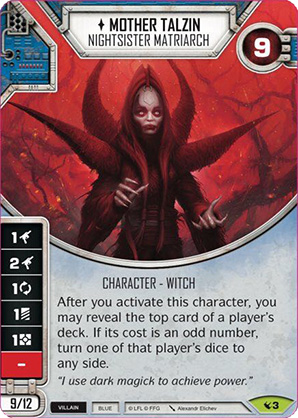 Before we go through its qualities, let’s take a look at the decklist.

So why this pairing and why this decklist? Sun Tzu wrote in The Art of War, “All warfare is based on deception. Hence, when we are able to attack, we must seem unable; when using our forces, we must appear inactive; when we are near, we must make the enemy believe we are far away; when far away, we must make him believe we are near.” And if you look at Thrawn and Talzin, you do not immediately see a threat. Thrawn has no damage sides, and Talzin only has a 1 ranged damage and a 2 ranged damage. The deck has a combined health total of 21, and these characters do not on the surface appear to have the ability to win easily. However, they possess two of the most powerful abilities in the game, and while Thrawn and Talzin are quite a bit more threatening than one might think, Thrawn is able to take away his opponent’s deception with his ability to see what is not normally seen, allowing Thrawn to plan the round to maximum efficiency.

There are some who would question the inclusion of Chance Cube (and its cost of 0 that doesn’t jive well with Mother Talzin’s ability), especially considering that Thrawn is a resource-generating machine. However, the ability to produce maximum resources is worth hard mulliganing for, and being able pay for multiple weapons in a turn in addition to the mitigation cards (that all cost 1) will not only help you ramp into a strong midgame but keep you alive to get to the midgame. Protecting Mother Talzin is not just convenient for your chances of winning; it is vital. Losing her on turn 2 is not something that you can easily come back from, and Chance Cube improves your survivability considerably. 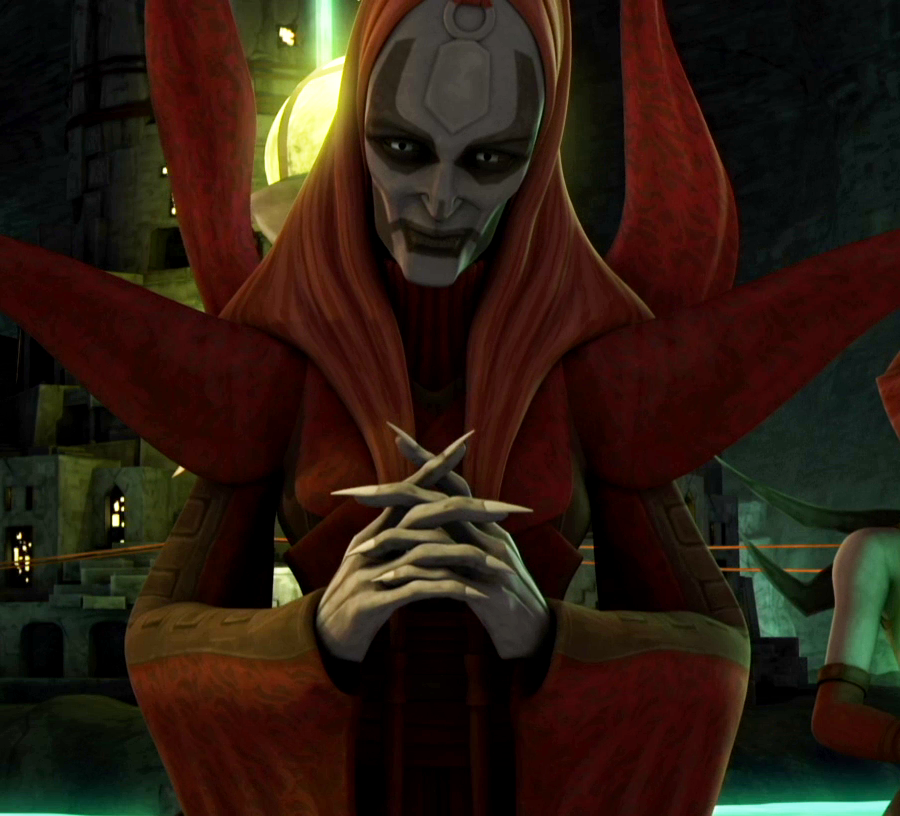 Being able to plan out your turn is one of the greatest strengths of this deck. Removing 1 or 0 cost mitigation cards will allow your damage to stick, especially since Mother Talzin is able to provide the sides that you most want to see. Knowing that your opponent has Easy Pickings will allow you to play around it, and while you may need to make a sub-optimal play by using Talzin’s ability to change your dice to different value sides, it is better to take a step backward than to have all your damage removed. And for those who go to World’s (many of whom have tickets from first place victories at regional events), knowing what decks tend to play what cards is more than sufficient to make the most out of Thrawn’s ability to disrupt the opponent’s game plan.

As powerful as Thrawn’s ability is, disrupting your opponent is only half the battle. The consistency from Mother Talzin’s ability is what will allow you to make big plays once you get some Z6 Riot Control Batons, Heirloom Lightsabers, and Rocket Launchers out onto the field. But damage is just one aspect of the consistency this deck brings. Its resource generation is one of the best in the game currently, and you know the golden rule. Whoever makes the gold makes the rules. While the first turn is all about setting up, round 2 and beyond is about regulating your opponent and producing damage. This deck doesn’t even realize that you have to pay 1, 3, or 5 for each card except the Chance Cubes. Imperial Discipline and Thrawn’s focus sides are enough to provide whatever you may need, and this deck is incredible for those who hate leaving the game to the luck of the roll.

And its consistency with resources leads us to the trap of this deck. Thrawn has 12 hit points and 0 damage sides. Contrast that with Mother Talzin who only has 9 hit points and 2 damage sides. She looks much more like an easy target, and your opponent will try to blitz her off the board as soon as possible. However, this is exactly what you want, because her survivability is incredibly deceptive. Force Illusion, Witch Magic (which hits for 3 because you hard mulliganed for those Chance Cubes, right?), and Rise Again vastly improve her ability to sustain damage, and by the time your opponent realizes that they have sunk so much time and energy into destroying her, it is far too late. By the time she does actually go down, hopefully your redeploy weapons are ready to move to a 12 hit point Thrawn who is more than capable of closing out the game. Does this mean that your opponent must get Thrawn first? If that is the case, Talzin closes out the game with three of the powerful upgrades and the ability to see the sides she wants.

I’ve come to the realization that Mother Talzin is my favorite Villain character. And of all the color combinations there are, Red and Blue Villain is my favorite. Access to Three Steps Ahead and Tactical Mastery make Talzin a very scary force to reckon with, and it feels like you get to do so much more than just 2 or 3 actions because of her ability that procs on her activation. Being able to activate and deal max damage out of nowhere is great for taking out a character when your opponent least expects it and can swing the game into your favor. This is a huge surprise for your opponent because for the first two turns or so, it looks like you are playing a game of catch up. Action cheating is usually a Sabine Wren – Explosives Expert or Rey – Force Prodigy kind of thing, but when your opponent doesn’t see it coming, it is even more potent.

These ingredients combine to form quite a powerful strategy. One might even compare it to… art. Knowing when to strike and when to press the advantage or when to claim resources and build your board state is something that can be very difficult to master. But considering that some of the best players in the game will be meeting at World’s, I believe that a skilled pilot can take this deck to the top. It has survivability and the ability to take away one of the few resources we have in this game: deception. For example, if I’m holding a card or two and I have a resource (or even none), I can make my opponent believe that I have removal options because they doesn’t know what my card is. I know that it is an upgrade that I can’t play, but to my opponent, who is trying to determine the odds of rerolling for more damage, that card could be Doubt, He Doesn’t Like You, Unbreakable, Easy Pickings, or any number of cards that could prevent their damage from sticking. But if I’m playing against Thrawn, and my opponent knows I can do nothing should they decide to reroll for more damage, I am helpless, unable to bluff my way out of the situation.

Thrawn is one of my favorite villains in all of fiction. He studies his opponents for clues in how to beat them, and his ability in Destiny perfectly encapsulates that. But is Grand Mother an easy deck to pilot? Certainly not. I myself need to practice quite a bit before I can even hope to master it. But there are dedicated players who, given enough games and experience with this deck’s subtleties, will be able to play a field of some of the best players in the world to achieve victory. This deck requires you to know the cards in the game and to have a mastery for the meta. And when you have a deck that rewards its pilot for familiarity and mastery, you have a combination that can take home the trophy. That’s all I have for now! Now study the art of rolls and you will defeat your enemy.