Written by Ray from Jackalmen Games

Every Star Wars Destiny player did two things after Fantasy Flight Games – Organized Play Department announced on Twitter that there will a Holocron Update coming soon. First, they held their breath in hopes that their favorite character or card doesn’t appear on the list, and second, they stopped all play testing for Worlds. We as players both understand the need for these updates and to some extent appreciate that FFG takes the time to recognize potential issues, however sometimes they go too far. We have been down this road before and to be honest the first Holocron Update for Standard play was devastating to many players decklists. It seemed like some of the most played characters/cards at the time were targeted as potential problems for the future of the game. Characters like Unkar Plutt, FN-2199, and Poe Dameron – Ace Pilot were once competitive options, but after finding their way onto the “Balance of the Force” list they are nothing more than over-costed relics that sit in trade binders. Cards like “It’s a Trap” and “Heat of the Battle” were changed so drastically that they will probably never see competitive play again. Its changes like this that can greatly affect a player’s consumer confidence in a product as well the game experience. You certainly would not like to purchase a product from a company under the impression that you were getting something you wanted to later have that company retract, change, or readjust the integrity of the product. The same principle applies when purchasing Star Wars: Destiny cards from FFG. You are simply “Rolling the Dice” when it comes to purchasing cards in hopes it doesn’t lose its current playability, effectiveness, or value. Many believe that one of FFG’s biggest mistakes came most recently with the play cost adjustment of Captain Phasma – Ruthless Tactician (2 Player Starter Set) that increased her from 9/13 to 10/14. By making this change it made her unplayable with Kylo Ren – Tormented One who was originally designed as her partner in the 2 Player Starter Set. The 2 players Starter Set was intended to appeal to both new and experienced players, however by making this what seemed like knee-jerk change to a newer character, it left many players wondering what other changes might be on the horizon Which brings us to the most anticipated question, when it comes to these updates, “Will this update affect my Legacies Cards?” With the conclusion of Regional Season throughout the world we as a community have been able to identify the power-levels of each card. I don’t think I am going out on a limb to say that most of us feel that this is the healthiest the meta has ever been. We have certainly seen a diverse collection of decks win these tournaments; some more than others, but still the numbers in comparison are reasonable. Gone are the days where only one deck like R2P2 (eRey2/ePoe2) dominated the meta. With that being said, certain cards are getting more attention within the community as we speculate on potential targets for this update. Let’s break it down and take a closer look at some cards that could potentially end up on this list.

Yoda:
I’m just going to start strong with this one! Its everyone’s favorite little green-guy!
This little bundle of fun can find his way in any type of deck archetype; hero mill, hero vehicles, and even Aggro. He has been known to be called the greatest support in character form. I also like to think of him as the grandfather of all special chaining shanagins through the current meta. This could be one reason his name keeps popping up to potentially be on this list. However, I feel if anything it be could be attributed to his ridiculously low play cost sitting at 10/13. Overall, I think Yoda is a health asset to the current meta, and hopefully not a target for the current update.

Seventh Sister:
Seventh Sister finds her way on this list out due to the overwhelming amount of decks she is currently being played in. Decks like eBoba/eSeventhSister, eTarkin/eSeventhSister and BROTK (Blue-Red One Turn Kill – eSeventhSister/Ciena/Nightsister) have swarmed the current meta, ultimately putting a giant target on her back. You could equate her impact on the game as the same that FN-2199 had during the Awakenings/Spirit of Rebellion meta. Her play cost is reasonably low at 11/14 and she technically starts the game off with 3 dice in the pool. Based on a by the numbers analysis provided by Golden Dice Podcast she has won nearing 16% of Regionals this season. Winning too much may be Seventh Sisters biggest downfall but we will have to wait and see if FFG feels the same way.

Aayla Secura:
Much like the previous two characters Aayla Secura has seen her fair share of play in the current meta. When this card was first spoiled many believed that she was extremely overpowered for her tremendously low play cost, which sits at 9/12. Her die sides are incredible, showing 3 damage sides and even a special which enables her to fix both your opponents as well as your own dice. She has seen a majority of her play in hero vehicles as one of the 3 characters that fit into that deck. However, towards the end of Regional season she displayed her versatility and made her way into two-character decks, pairing nicely with Poe2 (More than a Pilot) and Rey2 (Finding the Way). She is a very potent combination of damage and dice consistency, which is why many believe her name could be called on this current update. 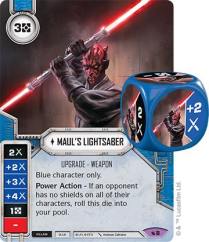 Maul’s LightSaber:
If you have participated in any competitive play this season you understand why this upgrade makes the list. This double-sided beat stick has been smashing its opponents and abusing its power-action since day one. Many believe that the power-action is too easily triggered and is almost automatic in many decks that run this card. Also, there has been legitimate arguments that its overall cost (3 resources) is far too low for the damage output this card can generate throughout a game. It has made its way in almost every villain deck running blue and has the scary potential to cut characters down turn one. Many feel that this card warrants strong consideration for a possible change. 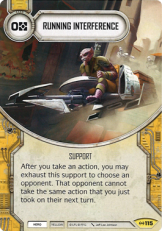 Running Interference:
Roll in with Sabine Wren, replace upgrade with DL-44 Heavy Blaster Pistol (AMBUSH), play “Never Tell me the Odds” and exhaust Running Interference (You can’t play a card). This is a common occurrence versus any experienced eSabine/eEzra deck in the current meta. As you stare down 9 damage that you cannot mitigate, you quickly realize that Running Interference should be formally renamed to “No Interference.” It creates a very helpless and non-interactive play experience within the game. Yea, sure the eSabine/eEzra player is having a wonderful time, but many argue that this gives the owner far too much control over the game state. Running inference positions itself very nicely with other powerful hero yellow options like Hyperspace Jump, Easy Pickings, and Second Chance. This card is also played in decks like eObi-Wan2/eMaz and eZeb/eYoda to limit mitigation after playing cards like Concentrate or Alter. However, a great counter to this card come in the form of Vandalize, Rend, or Force Rend which is why I feel it will ultimately be safe for this update. But like the other cards on this list it remains to be seen what FFG will do.

In conclusion, I feel that many players would rather see less of their beloved characters/cards end up on the “Balance of the Force” or Errata list all together. I believe that FFG should simply start to produce more cards that can counteract other cards directly. If you provide the game with the necessary tools to combat these powerful cards, then you will see that players will self-regulate within the meta. In addition, I believe that there will always be certain cards that will have their time in the spot light and FFG should not change them to such an extent that they are no longer viable. Powerful cards create just as much draw and appeal to players as they turn others away. Moreover, leveling the playing field too drastically could also have negative effects as certain players will become frustrated and bored with the overall game experience. It’s no denying that FFG has made a few mistakes in the past, but that is to be expected when it comes to shaping this game for the future. We must understand that Star Wars: Destiny is still a very young game and as creators gain more experience I am sure large Holocron Updates will be few and far between. As stated before the meta is in a very healthy spot and players are enjoying a wide array of decks right now. I think there is little to complaint about when it comes to specific cards, but then again we cannot be certain they FFG has the same opinions. So I think we will all continue to hold our breath as we await the current Holocron Update!

Published by Ask Your Mother

Hello, my name is Ray. I'm the dad to 2 crazy little boys and husband to an incredibly driven woman. No one ever told me it would be easy, but who knew it would be this hard? Join me as I docuement my personal journey to becoming better at both of these challenging roles, all while enjoying life to the fullest! View all posts by Ask Your Mother