Is that armor too strong for blasters? Your shields can’t repel firepower of that magnitude? Then welcome to an AT-TA that will try to give you a leg up on a popular deck. In this Go For the Legs issue, we’re going to look at what makes the Obi-Wan Kenobi and Maz Kanata deck good, and what you can do to tech your deck against its weaknesses. This deck has caused me some frustration, let me tell you.  Let’s Force-jump in. 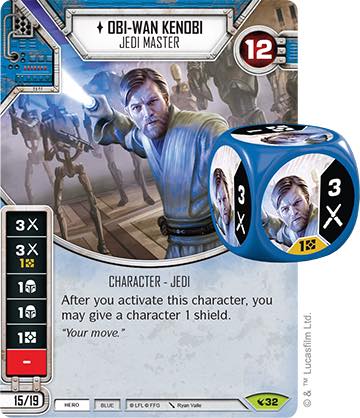 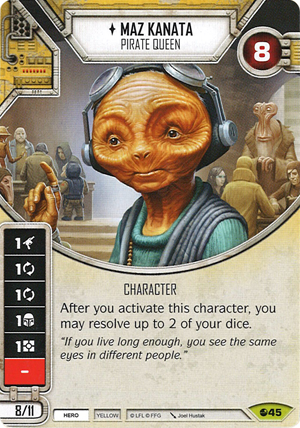 This version of Obi-Wan portrays the Jedi Master at the height of his abilities during the final hours of the Clone Wars and as a master of his defensive style of fighting. His ability allows him to give one of your characters a shield upon activation, and since shields have become relevant with the nerf to Vibroknife, this can turn him into an AT-AT really quickly. As a big fan of Obi-Wan, I love how this ability portrays his preferred lightsaber style Soresu.

Maz Kanata, the pirate queen of Takodana introduced in the Force Awakens, is a perfect support character for Obi-Wan. Her role in the movies is to guide characters to their destiny, whether encouraging Rey to find Luke and learn more about the Force or recommending that Finn go to Canto Bight to seek out the master code breaker. Her ability represents her influence, guiding dice to the sides you need with her two focus sides and allowing you to resolve two dice immediately as she activates.

The strength of the deck is its ability to consistently deal damage at an alarming rate. The main strategy is to roll out Obi-Wan and hope for his 3 Melee side on both dice. However, it’s no big deal if you miss damage, because when Maz activates, she will hopefully roll at least one of her two focus sides. Since her ability allows you to resolve two dice when she activates, you can use a focus to turn an Obi-Wan die to a 3 Melee side and immediately resolve it before it can be messed with or removed.

Getting what you need and using it before it can be messed with by your opponent is nothing new. However, part of this deck’s strength is dealing a lot of damage while shielding up at the same time. This makes it far more intimidating than it really is. When you see Obi-Wan reduce one of your characters to half hit points during the first turn without upgrade dice (and I guarantee he will not be rolling without a lightsaber for long), it can surprise and frustrate you, making it harder to maintain your cool and mount a counter offensive. However, Destiny is as much about managing your own feelings and responses as it is about handling your opponent’s dice and abilities. If you can relax and, like Poe Dameron, refuse to be intimidated, you will be able to come up with a plan for dealing with your opponent’s strategy. Luke didn’t panic when he saw that his task force was unable to meet the AT-ATs head on at the Battle of Hoth. He looked at his resources and came up with a different strategy for the win, and that is what we can do against this deck.

As if the character dice and abilities weren’t enough to deal with, there are upgrades that really take this deck to the next level. The four most popular upgrades that will be seen in this deck are the Shoto Lightsaber, the Handcrafted Lightbow, Force Speed, and Obi-Wan’s Lightsaber. Shoto Lightsabers increase the amount of shields that Obi-Wan produces and make his 12 health feel like 20. Handcrafted Lightbows allow Obi-Wan to handle enemy shields with its special and can increase his damage output by a substantial amount. Force Speed makes the deck even faster, combined with Maz’s ability to resolve two dice upon activating. Obi-Wan’s Lightsaber enhances his defensive attack with its special. Any three of these on Obi-Wan at once is going to turn him into a veritable AT-AT.

One of the great things about the current meta is that there is no one deck dominating the game. Characters that used to be the end all play all (like Poe Dameron – Ace Pilot and FN-2199 – Loyal Trooper) are not storming regionals or store championships anymore. One reason is adjustments have been made to problematic characters, but another reason is, with four sets of this game, there are quite a few card combos that take away the tremendous advantages that these characters used to enjoy. And Obi-Maz, while powerful, can still be brought low with simple events. Let’s take a look at a few that you can slot into your decks to “go for the legs.”

Rend is a situational card that has obvious targets such as Sith Holocron, Fast Hands, and Chance Cube. When facing Obi-Maz, Rend’s primary target is going to be Force Speed. Force Speed is what makes Maz’s ability so oppressive. She can use a focus to change Obi-Wan’s die to damage or Force Speed’s die to the special, allowing for a reroll into damage or a claim for the battlefield. In the games I’ve played against Obi-Maz, that blue 0 cost upgrade has been a safety net that prevents me from even thinking about removing dice.

Vandalize is a better version of Rend, though it does require you to have at least one Yellow (Rogue) character. With it you can get rid of Force Speed, but it can also get rid of Obi-Wan’s weapons, something that, early game, can slow the deck’s ramp. Vandalize does require you to remove your own dice, but taking away a Handcrafted Lightbow or even a Shoto Lightsaber is more than worth it in my opinion.

Confidence is a card that does not see a lot of play but can be very effective in preventing Obi-Wan’s damage. While the villain card Doubt is a better version by far, a well-timed Confidence can force Obi-Wan to resolve one of his shield sides before Maz can focus it to 3 damage. This may be a one-card include, but I’m always happy to see that dashing scoundrel save me from a bunch of damage. Cards like Mislead and Electroshock are also viable for getting rid of Obi’s shield sides before Maz flips them into damage. It may not feel like the best play to remove a non-threatening die, but controlling all of Obi-Wan’s dice is the key to victory.

Those cards are great if Obi-Wan rolls out and doesn’t hit damage on his own. However, they will do nothing if he does roll his 3 melee sides naturally, as Electroshock and Mislead have a limit. Fortunately, one of the best Yellow hero removal cards arrived in the Legacies set: Easy Pickings. If Obi-Wan happens to roll two 3 melee sides, Easy Pickings will, for the cost of just 1 resource, save you from 6 damage (and it doesn’t matter if one of those 3 sides is a pay side).

Removing dice is only half of the battle, however. Eventually you will run out of mitigation cards or resources to use them. That means you’re going to have to play an aggressive game as well as a defensive one. But this is made difficult by all those blasted shields preventing your attacks from sticking. This is where your battlefield choice comes in. If you are not running a shield deck yourself, the Ewok Village is a very potent card against Obi-Maz. When you claim, it allows you to remove all shields from a character. This can essentially be a free attack that will also allow you to go first next turn and capitalize on a shield-less Maz. Her 8 health will not keep her in the game for long, and dealing with Obi-Wan without her ability to focus his dice makes your game much easier.

Another offensive option is to fight fire with fire and run the Handcrafted Lightbow. Its special allows you to strip away Obi-Wan’s shields and additionally deal 2 damage. A Lightbow on Yoda allows for special chaining that will help you to keep up with the Obi-Maz combo.

Now, the Lightbow is a hero-only card, so if you are more of the villain persuasion, have no worries! Kylo Ren’s Lightsaber from the Awakenings set is a formidable alternative. Its special allows you to reroll it back into the pool if its 2 damage is blocked by shields. In the right hands, this lightsaber can do some serious work.

Also in the villain camp are cards like Frighten and Intimidate, which are great for removing shields. These combo well with Maul’s Lightsaber, though I do not like Maul’s Lightsaber nearly as much as Kylo’s. In the right deck, of course, Maul’s Lightsaber shines with its high damage modifiers, but I personally struggle to keep shields off both characters to utilize its Power Action, whereas Kylo’s Lightsaber has helped me quite a bit no matter how many shields are on Maz and Obi.

Just like the AT-ATs at the Battle of Hoth, no deck is completely impenetrable. By understanding how Obi-Maz works and figuring out what card combos help exploit its weaknesses, you can go for the legs and take down the competition.

That’s all for now! Remember to keep calm and roll on!