In this instalment of Always in Motion is the Future, we’re going to look at a character who has not yet been created for Destiny and, after looking at some background info, hypothesize what abilities and stats that that character might have. Theme is very near and dear to my heart, so I take great pleasure in matching abilities and even dice sides with a character’s personality. This week I want to look at a clone captain, specifically one who served in the 501st under Anakin Skywalker in the Clone Wars: Captain Rex! 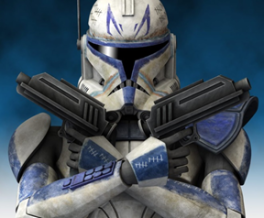 In the The Clone Wars cartoon series, my favorite character has always been Captain Rex. Not only does he serve in the 501st, which would later become Vader’s Fist, he has really cool looking armor that sets him apart from the rest of his clone brothers. Dual wielding blaster pistols like Jango, Rex is a fierce combatant and cunning strategist. He’s gone toe-to-toe with the likes of Asajj Ventress and General Grievous and is loyal to his Jedi companions.

As a captain in the Grand Army of the Republic, Rex would definitely be a Red (Command) card. We have the Clone Trooper from Legacies that is also Red, and even though Rex has blue armor, it’s hard to fit him in any other color. Even when he shows up in Rebels years after the end of the Clone Wars, his grasp of tactics and military indoctrination would keep him in the Red category. I could see the case for Yellow (Rogue) at that stage in his life, as he hides away from the Empire, but helping the fledgling Rebellion as he does, and especially during the Clone Wars, I would firmly place him as a Red character.

I would like to see Rex in the 10/14 cost range. A thematic squad would then be eCaptain Rex/Clone Trooper/Clone Trooper. Also, I want him to be able to pair with Anakin Skywalker – Conflicted Apprentice. The 10 cost for one die would allow him to have 10 health, which of course could be enhanced by Plastoid Armor.

“We’re not programmed. You have to learn to make your own decisions.” – Captain Rex

While he was conditioned from birth to fight and follow orders, Captain Rex has spent enough time with Anakin Skywalker to know that combat requires flexibility and good judgement. A commander can only see part of the picture, and the troops on the ground have a different perspective on how the battle is unfolding around them. For this reason, I would give Rex a 1 focus side. And as with any good captain, a 1 resource side is a must.

I would also like to see a special that interacts with the battlefield in some way. With the Clone Trooper’s ability enhanced by battlefield control, as well as the supports Ground Battalion and Mortar Team interacting with the battlefield, I feel it is a flavorful addition to Red cards. It made me think of the original Star Wars Battlefront games where capturing command posts was an alternate win condition to killing everyone on the opposing team. A special that I would enjoy would be to deal two damage to a character, or 3 if you control the battlefield. This would allow for some pretty crazy special chaining with Aayla Secura – Jedi General and Yoda – Wizened Master. It would also force your opponent to seriously consider controlling the battlefield even more so than usual, giving Captain Rex’s player a huge advantage after an opponent claims early to prevent a large amount of damage.

Now, I have a guess as to what you’re thinking as you look over my creation. It all sounds so familiar… That’s because it is! The character stats I just described belong to Captain Phasma – Ruthless Tactician with a slight modification of her special (which requires a character to have at least 3 damage on it in order for her to deal 3 damage with her special). So there wasn’t actually a whole lot of creation on my part. However, when I compare the characters of Captain Rex and Captain Phasma, I believe that he is far more deserving of her card than she is. This saddens me, because when I first heard about Phasma, I was ready to be a big fan of the chrome trooper. And yet, she proved to be another Boba Fett, completely wasted and standing on nothing besides an undeserved reputation and really cool armor. Captain Rex, on the other hand, has a rich history played out in two animated series and, if Dave Fiolini is to be believed, was even present at the Battle of Endor! 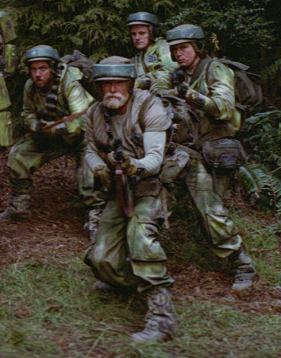 Now, I promise that the next Always in Motion is the Future article will be a sight more original, but I have been sitting on this idea for a while. When Phasma was first spoiled and when I was playing her with Darth Vader – Dark Apprentice, I couldn’t help but imagine her reskinned as my favorite clone trooper. And I’m sure that he has enough fans that the Destiny developers will make one or even two versions of him (one from the Clone Wars and one from Rebels or Return of the Jedi). With as much attention to detail as they have shown with our other characters, he will be a fantastic card.

That’s all I have for today! Get some games in and keep rocking and rolling!