This is a follow up to a previous article, Building Palpatine. After much playtesting and 2 local tournaments, the results are in on ePalpatine2/Gamorrean Guard! It is an incredibly fun deck to play! Not very often in Star Wars: Destiny does one get the chance to put three force abilities on a big Blue character and heal chunks of damage while doing it. Few decks utilize the “guardian” keyword as well as this one and the Gamorrean Guard makes a fantastic meat shield. That being said, it has its faults. Fast decks make mitigation difficult. When mitigation is difficult, Gamorrean Guard is worse. When Palpatine dies… things look bleak. Out of all tournament rounds, the deck went 3-4. There were certainly a few misplays in there, but overall the deck is good amongst other low-level decks but doesn’t hold up well against the big decks in the format. 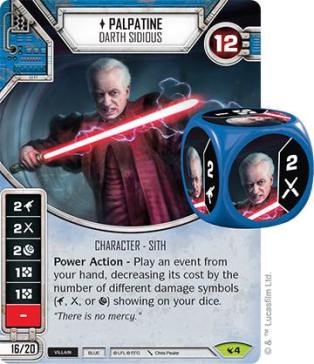 HOW TO PLAY:
In the opening hand, you really want to have a Sith Holocron. Even if you are unable to find a Blue Ability Upgrade, it is very likely you will get one soon. That being said, it is usually worth tossing events and the other upgrades to try to find one of the force abilities if you already have the Holocron. The Personal Shield is also a card that does particularly well early, unless your opponent isn’t running ranged damage. In that instance, I will generally mulligan the Personal Shield. An ideal opening hand would look something like this:

If the opponent’s battlefield is selected, I always put the shields on the Gamorrean Guard. The Guardian keyword essentially forces your opponent to go for the Guard first, or face endlessly divided damage that keeps both of your characters alive for long enough to find a win.

Play Sith Holocron as soon as possible. The force abilities on Palpatine add consistency to his power action and greatly increase your decks damage output. You will be saving and making enough resources that you will almost always spend one [on Holocron’s ability] to roll the new dice into your pool.

It is important that you keep a stocked discard pile for Rise Again. Keep in mind that Sith Holocron can only work with the Blue Upgrade-Abilities, but Rise Again can hit any upgrade, including: Personal Shield, Lure of Power, BD-1 Cutter Vibro-Ax, Sith Holocron, and any of the upgrade-abilities. You do not want to be in a position where you are ready to play Rise Again and do not have an upgrade in the discard pile to cheat out.

Round 1 – eQui-Gon/eKanan:
I knew this would be a tough game from the start. I mulliganed searching for the Vibro Ax and didn’t find it. Eventually I got it out but it was too late. Gamorrean Guard was dead and I played the Ax on Palpatine who died within two rounds. With shields being the way they are, it may be prudent to add a second Vibro Ax. Loss for ePalp/Gamorrean.
LOSS 0-1

Round 2 – Triple Death Trooper
Endless Ranks is an impressively annoying card. My opponent only used one copy of it this game, but afterwards told me that there was a second in the deck. The damage output was low and easily mitigated. Personal Shield worked really well against this deck. With three characters to activate, it was slow allowing me to claim the battlefield multiple times. Going first with Palpatine is great as it lets you Power Action your removal. A well-fought match, but ultimately a win for ePalp/Gamorrean.
WIN 1-1

Round 3 – eHan/eSnap
This is cool, if not a little gimmick, deck that consistently shows up at my local game store. It essentially looks to claim the battlefield as frequently as possible and gain massive benefits from doing so with cards like Planetary Uprising, Drop Zone, and the Main Plaza Battlefield. It appears that step one in defeating this deck is to win initiative and NOT choose Main Plaza. But even if Main Plaza is chosen, consistent damage will force the opponent to use it to heal as opposed to dealing damage. That is how I was able to pull off a victory. Healing with Rise Again is always nice too! Win for ePalp/Gamorrean.
WIN 2-1

Round 1 – eYoda/eLando
This was a mill deck that ultimately put up good results. It went 3-1. The truth is, this battle came down to battlefield choice. My opponent won initiative and opted to use my battlefield. He claimed 3 times. Had he used his battlefield (Command Center), he would have milled an additional 6 cards, which would have emptied my deck. Yoda’s ability to fix Lando’s dice to make me discard would have made short work of me. However, my battlefield gave him no benefit and the two shields he got from initiative weren’t enough to keep him alive. I targeted Lando first, but Yoda ended up with 4 damage on it (from indirect damage and force wave’s special ability). Then I was able to resolve 6 damage in one action and put it all on Yoda, finishing him off. With just Lando, the milling slowed and his dice struggled to correct themselves. Win for ePalp/Gamorrean.
WIN 1-0

Round 2 – eZeb/eYoda
To no one’s surprise, this deck runs 2 copies of Handcrafted Light Bow. My opponent put one on each character… at which point I knew I was in trouble. Perhaps I shouldn’t have played Personal Shield, but I did, and Light Bow rendered it useless. Zeb’s dice have no specials to chain, but put up consistent big damage anyways. Guardian couldn’t stop the Light Bow specials and Palpatine went down first. If Palpatine dies first, many of the cards in this deck become useless. Loss for ePalp/Gamorrean.
LOSS 1-1

Round 3 – eMother Talzin/eCad Bane
This was not a deck I expected at this tournament and it performed impressively! It is definitely the fastest deck I have played against. By putting Quickdraw Holster and ambush weapons on Cad, my opponent was able to activate Cad, reroll his weapons, and resolve in one turn. Mitigation was useless! Gamorrean Guard was useless! Palpatine died first rendering most of my remaining cards useless (Blue character only, spot a blue character, etc.). I lost very quickly. Loss for ePalp/Gamorrean.
LOSS 1-2

Round 4 – eLuke2/eFinn2
This was far and away the closest match for Palpatine. I lost in tiebreakers as my opponent had done more damage. My opponent was out of cards in hand and had resolved all dice. Finn had three health remaining. I had only one Force Lightning die left on the table. 2/6 sides on that die would win me the game (I had two resources). I discarded to reroll four times and found nothing but the special or the blank each time. I lost with a blank sitting on the table. Quite the bummer. Loss for ePalp/Gamorrean.
LOSS 1-3

CONCLUSION:
Many games will be won with both characters still alive. Some decks really struggle to finish off a Gamorrean guard that has been equipped with 1 or 2 Personal Shields. Every turn you will do some combination of removing your opponent’s strongest dice, dealing base damage with your dice, and stacking on additional damage with your events. Once your opponent is down to one character, all of the indirect damage becomes direct (essentially) and makes short work of their lone survivor.

The deck is pretty consistent as far as damage output is concerned. Where it struggles is with speed. Sometimes, you roll different damage symbols as soon as you activate and there is minimal rerolling or fixing required. Sometimes you roll all resources and blanks and need to take a few extra actions to repair. But it is super fun to play and is capable of doing some absurd things. Few decks in the game cheat on resources like this one! This deck lets you frequently fill Palpatine with Force Abilities and then heal him once or twice per game. That is enough power to win most matches!

Force Illusion and Ancient Lightsaber may buy enough time for this deck to seal the deal. Currently, my copies of those cards are engaged elsewhere, so you all will have to let me know if it works!

That is all for now. If you have any suggestions for building or playing this deck, let me know in the comments!