Hello Destiny players! I am introducing a new series of articles today called Judging Others. In this series I will be looking at various rules interactions in Star Wars: Destiny and remarking on the overall process of judging the game. Some of the interactions will be more complicated than others, but all of them merit a bit of research into the rulebook and clarification on why they do what they do!

A little personal background before we get started. I play Magic: The Gathering. It is the first game I played at a formal level. With only a minimal understanding of how to play, I got to slug my way through various rules interactions at Friday Night Magic events where judges were called to explain some of the more complex aspects of the game. I am also a law student with a limited license to practice law. I have tried cases in front of judges and juries where an explanation of the law is often essential to the outcome. Now I am fully engrossed in the SWD Galaxy and have found myself a Marshall position for a sizable weekly tournament at a local game store (for those of you who don’t know, the Marshall is Fantasy Flight’s title for head judge). I am relatively new to the game and am not particularly qualified to judge it, but the store required someone to volunteer and I took the job… and now I love it!

In the Judging Others series, I will look at rules questions and attempt to flesh out a resolution based on the official Fantasy Flight Games (FFG) Rules Reference for Star Wars Destiny. If you are not familiar with trading card games or other extensive strategy games, you may think it odd that the rules require such attention. Very rarely in a game of BINGO, Connect Four, or Battleship does one need to dust off the rulebook and determine an exact sequencing of events or clarify seemingly basic definitions. In games like SWD (and MTG for that matter) the rules remind me a lot of the law. What you have is a collection of statements. These statements constitute the law (or the rules). When read independently, they typically outline how to act (or play). Sometimes, however, something happens that falls between two of these statements. When this happen, which statement applies? Answering that question is the job of the Marshall or judge.

Lets look at an example of an interaction that took place at my tournament this week. The card in question is Force Illusion: 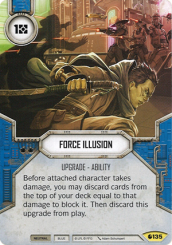 Player 1 has only one living character in play, Rey – Finding the Way. Rey is equipped with Force Illusion and has only 4 health left. Player 1’s deck has only 3 cards remaining. It is Player 2’s turn and they have 1 die in their pool showing 4 ranged damage. Player 2 states that he is resolving the 4 damage and sending it at Rey. Player 1 discards Force Illusion and the remaining 3 cards from the top of the deck and takes no damage. Player 2 calls the Marshall.

It is the job of the Marshall to resolve the dispute and restore the game to the state it was in before the rules violation (if any violation is found). If you are a Marshall or judge at a tournament, always use the index of the Rules Reference to look up the card at issue. Had I done this, I would have found that FFG had issued a clarification of this particular interaction (Rules Reference v1.6. P. 26). However, the process of analyzing undiscovered interactions is important and should be explored. Let’s take a closer at that process and the interaction in dispute:

Force Illusion reads “Before attached character takes damage, you may discard cards from the top of your deck equal to that damage to block it. Then discard this upgrade from play.”

Step 1: Identify the Elements of the Text in Question
The first step in analyzing any card text should be to break it up into elements. Force Illusion breaks down as follows:

This card contains a “Before Ability”, which is discussed under Part 7. Abilities >Triggered Abilities >Before Abilities (Rules Reference v1.6. P. 18). Typically, a card like this has a trigger condition and an effect. Here, however, we have an additional optional action that must be taken in order to receive the effect.  The trigger condition is “before attached character takes damage”. This means that the trigger activates before each and every time the character takes damage. This may sound odd, but the only thing that triggers before damage is the option to take the optional action. The optional action is “you may discard cards from the top of your deck equal to that damage”. We know that this action is optional because of the phraseology “you may”. The effect, “to block it”, happens only if the player elects to do the optional action and satisfies that action completely.

Step 2: Identify the Issue
Here, there is no dispute that the triggering action occurred. In other words, Rey was about to take damage. The dispute was whether or not the damage would be blocked (element 3). And, as we discussed in Step 1, element 3 only happens if the player takes the optional action (element 2). So, when boiled down, the question is whether or not Player 1 satisfied the optional action causing the effect to happen.

Step 3: Analyze the Situation
It is important to hear from both players regarding what took place immediately leading up to the dispute. Here, there was no disagreement as to what actually happened. So to make a proper ruling, I would have needed only to determine whether Player 1 discarded cards from the top of his deck equal to the damage. Because Player 1 only had 3 cards remaining in his deck; that is what he discarded. The damage being dealt was 4. Three does not equal four. The optional action was not satisfied.

Step 4: Issue the Ruling
As a marshall you want to provide a definitive ruling with a brief but adequate explanation. Here is what that would sound like in this situation:

“The optional action of discarding cards equal to the amount of damage was not completed, thus the damage is not blocked”

Step 5: Repair the Game State
In this particular instance, not blocking the damage meant that the game ended as Rey died. However, if this were not the final turn of the game, it is the Marshall’s job to fix the game state. Here, it would not be difficult as the disputed action all occurs on one turn. In a casual tournament, Player 1 would simply return the discarded cards facedown to his deck in the order they were in prior to discarding (if the order is disputed, that is another issue).

I am a little embarrassed to admit that I initially made the wrong call. I based my decision off of the rules text that states “Players must resolve as much of an ability as they are able to…” (Rules Reference v1.6. Part 7. Abilities. Page 17). Essentially, my interpretation held that if Player 1 milled as much as he could, he would have satisfied as much of the card text as he was able to do. This was incorrect because the text called for the discarding of an exact and specific number. That number may be different each time the ability triggers, but upon triggering, the number becomes exact. You either discard the exact number, or none at all.

This particular round of the tournament was nearing completion and other players who were finished with their match had gathered round to weigh in on the rules dispute. As soon as I made the ruling, several of the players (who I believe to be quite versed in SWD rulings) expressed that I had made the wrong ruling. A brief discussion of the rules ensued and I was shown my error. The game state had not advanced (and it is a casual tournament) so I reversed my own ruling and issued one in favor of Player 2. Player 2 knew that I had made the wrong call from the beginning, but was a very good sport about it and was willing to continue play with the bad ruling. Player 1 is also relatively new to the game and accepted that there were interactions he simply did not know of.

I would like to note that it is typically a bad idea as a Marshall to reverse a decision based off of the input of others. That being said, I am relatively new to the game and the rules and have been granted a bit of leniency for these tournaments. I now hear both sides of the argument before making a ruling and have a laptop available for a bit of quick research. As I learn more about being the Marshall, I will continue to share my experiences so that other new judges may learn from my mistakes.

CONCLUSION:
To sum it up, you must discard enough cards from the top of your deck to block all the damage with Force Illusion.

That’s all for today! If you want to weigh in on the discussion or have a rules question/interaction you would like to have explored, let me know in the comments!

3 thoughts on “Judging Others – An Expansive Look at Rules and Rulings in Star Wars Destiny, Issue #1: Force Illusion”