Ranking the Lightsabers in Star Wars: Destiny Part 3 – The Bendu

After ranking the Hero and Villain lightsabers, we now conclude with the Neutral lightsabers. These are some of the best in my opinion and can go in almost any Blue Melee deck. Let’s dive in and rank the lightsabers anyone can play, starting with another obvious number 1. 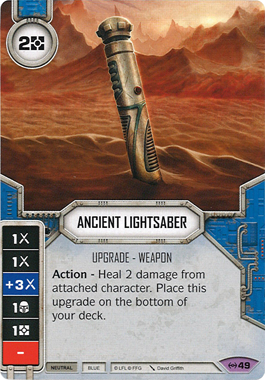 -Action loses you a solid die
-1 damage can be underwhelming

There is a reason why Ancient Lightsaber is so expensive and all of the reasons above are just some of the few. This card is a staple for a reason. Just by playing it, you give yourself a 2 damage swing. Resolve it on its worst side that causes a swing and you are up to 3 on your first turn, that is not bad for a 2 cost weapon. Get into the combos that you can do with this card and that number can double turn 1. This is a must for Blue decks and is must have in all decks in this humble writer’s mind. 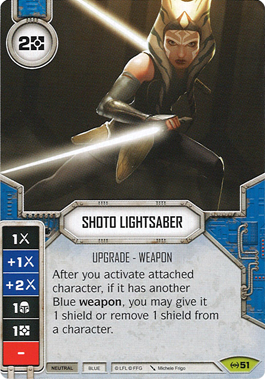 The effect alone earns this card it’s number two spot. While its effect does rely on another Blue weapon card and its die mostly relies on non-modified melee sides, a two damage swing upon activation with 2 Shotos is nothing to ignore. Even in a deck that does not have bonuses because of its effect play it. The huge downside is of course that it is a weapon that isn’t really that good standing on its own. 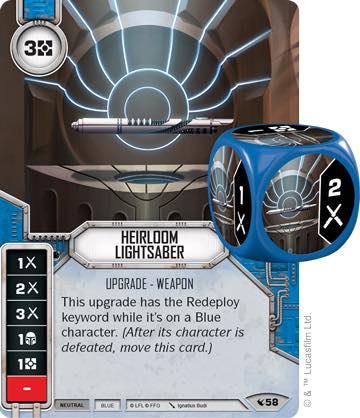 -Redeploy is conditional
-Cost to swing is fair compared to others

This card is really good and is worth being talked about. I know you are asking “If this card is so good, then why is it number 3?” The reason for that is because there are cards that cost less that proved more of a swing. Despite that though, there is no reason why you do not want this card in a Blue Melee damage deck. Another Lightsaber I would consider a staple, though slightly less. Perfect in decks where a Blue character is going to go down 1st. 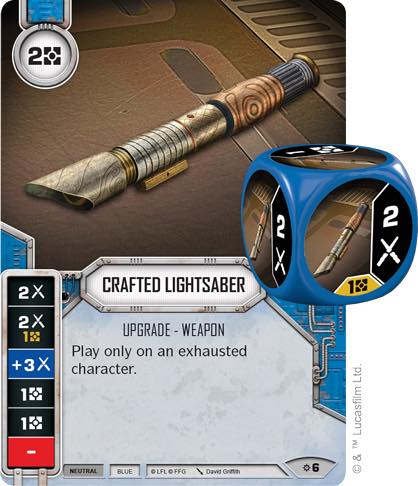 Wow, the die sides on this die are amazing. I do believe that this card has the best die-to-cost ratio, at least without considering effects. So why is it so low? It is because of its drawback, waiting to play this card is like waiting to play a higher cost card the next round. Though in that sense I do feel like this card is worth it. It does feel like a 3 cost upgrade if it didn’t have the drawback. In Standard there are better lightsabers to play but I would not be shocked if this is leaning towards a possible staple in Trilogy. 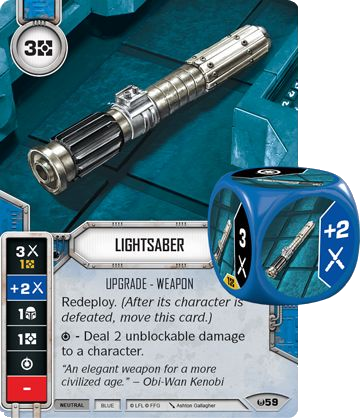 +Redeploy
+Unblockable damage
+No character restrictions
+Special can be chained into

The one that started it all. This is the lightsaber that was the first one people played. It is not a bad card, but it is now not worth playing due to being outclassed. Even with a special that does unblockable damage and having redeploy, it is not worth the consideration. It is kind of sad, but it is a good reference to see how far lightsabers have come. RIP Lightsaber.

Conclusions:
There you have it, those are the Neutral lightsabers. They are all pretty solid cards that are worth considering putting into your deck that contains a Blue character. It goes to show you that there is strength in the middle that both affiliations can access. Except Lightsaber, you are not worth it anymore (Sorry).

That concludes Chapter 1 of The Weapon of a Jedi. I hope you enjoyed this chapter and perhaps that it has also helped stimulate some creative thoughts. Please feel free to leave your feedback regarding this chapter or any part of this chapter in the comments below. We will see you next time in chapter 2 where we put it all together.

May the Force be with you